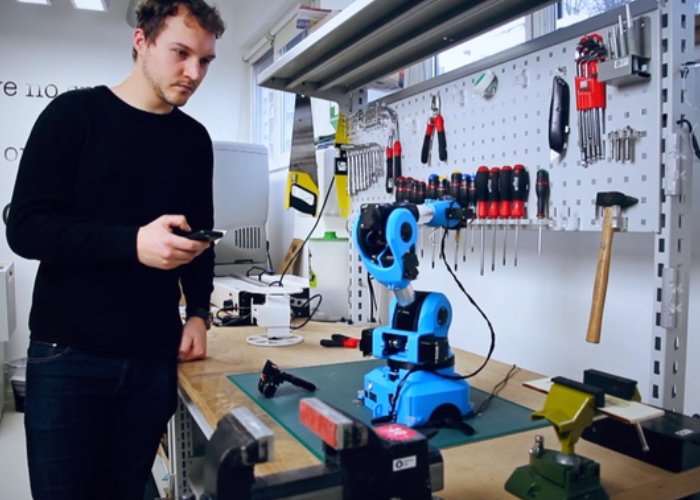 A new 6 axis robotic arm has been created by the development team at Niryo based in Lille, France, which is both open source and can be powered by Arduino, Raspberry Pi and ROS.

Watch the video below to learn more about the Niryo One robotic arm which is now available to back with pledges starting from €549 for earlybird backers, and shipping expected to take place during September 2017.

The development team behind the Niryo One robotic arm explain more about its inspiration, features and design.
Industrial robots improve every year. They become more powerful and more precise. However, their price is still very high and they are only available for big industrial factories. If you want to get a robotic arm for your home, your school, or your small company, you will have to spend between 20,000 $ and 200,000 $, and most companies will not even bother selling a robot to you.

Our goal is to make robotics accessible for everyone. For us, accessible means two things : low cost and user friendly.We have the dream that everyone can learn robotics and have a better life with a desktop robotic arm. Niryo One is an accessible 6 axis robotic arm, made for makers, education, and small companies. The robot is 3D printed and powered by Arduino, Raspberry Pi, and Robot Operating System. STL files and code on the robot will be open source after the first shipments. More than a product, we are building a complete set of cloud services around Niryo One, and a community around open source projects.

For more information on the new Niryo One robotic arm jump over to the Kickstarter website for details by following the link below.