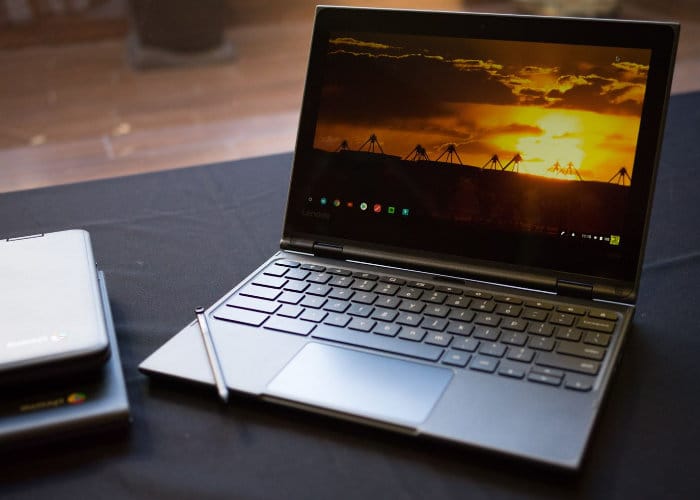 At this year’s Mobile World Congress 2018 technology event, Lenovo has unveiled a number of new tablets in the form of the Lenovo Yoga 730 and the new rugged Lenovo Chromebooks which have been designed for educational establishments and students looking for a versatile system that is capable of taking a few knocks and bumps. The most affordable new Lenovo Chromebook takes the form of the Lenovo 100e which provides users with an 11.6-inch screen offering a resolution of 1336 x 768 pixels and is priced at $219.

Next up is the slightly more expensive Lenovo 300e Chromebook which is priced at $279 and provides users with a Yoga style 360-degree hinge and comes with a touchscreen and stylus allowing users to take notes and make sketches onto the screen directly. The 300e Chromebook is also capable of accepting notes written on the screen using a standard HB2 pencil without leaving marks all over the screen.

At the top of the range, the Lenovo 500e Chromebook comes complete with its own stylus with storage space allocated in the case design providing lag-free input thanks to the inclusion of the Chrome OS API. All three laptops sport the same screen size and resolution and are all charged using the included USB-C connection offering up to 10 hours of use from a single charge. As far as specifications are concerned the 100e and 500e use Intel Celeron processors form of the N3350 for the 100e and the N3450 processor for the 500e systems. The 300e is fitted with an ARM-based MediaTek MTK 8173C processor and a full-size SD card slot while the other two systems are equipped with microSD card slots allowing users to expand the on-board storage to meet their needs.