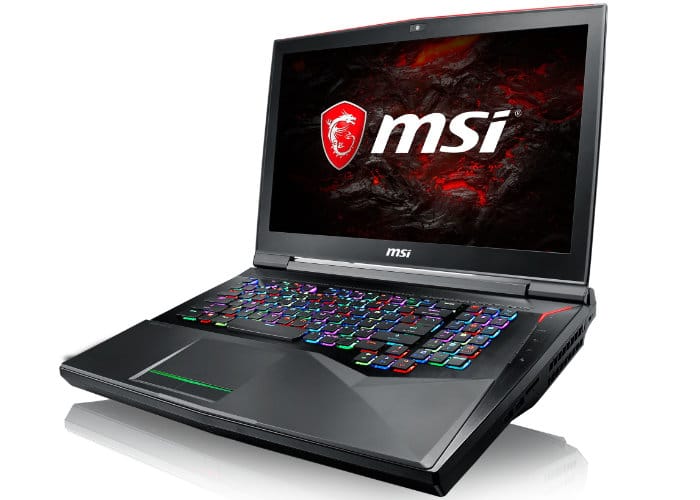 During this months CES 2018 technology show MSI has been showcasing the latest additions of their hugely powerful and robust MSI gaming notebooks in the form of the GE63 Raider RGB and GT75VR Titan Pro. The latest GT75VR Titan Pro gaming notebook is now equipped with the all-new Killer Wireless-AC 1550 module which has been developed in partnership with Intel and is currently the world’s fastest 2×2 11ac wireless networking adapter, providing 1.73Gbps of bandwidth. The features of the Killer 1550 include 160 MHz channel support delivering twice the throughput of standard 2×2 11ac adapters.

MSI has also been showcasing its latest GE series gaming notebooks which have been a favourite mobile solution for gaming enthusiasts since their launch. The new 2018 additions of the GE63 Raider RGB been given a complete facelift inspired by “exotic sports cars” says MSI. The latest RGB technology offers 12 zones of the lights on the notebook on the top cover and sides together with a backlight offering 24 million different lighting modes that can be tweaked using SteelSeries Engine 3 or independent control by Dragon Center. Providing gamers with in-game real-time interactions giving feedback to both gamer and anyone in the vicinity.

In addition to its gaming notebooks, MSI is launching an innovative new Gaming Mode, which gives better gaming performance, more interactive backlighting and in-game optimisations for popular titles like Player Unknown BattleGrounds, DOTA and more. Unfortunately, no information on pricing or worldwide availability has been released as yet, but as soon as news comes to light, we will keep you updated as always. In the meantime jump over to the official MSI website for full details on all the currently available gaming notebooks.