A new square mini robot has been created called the M-Block that is capable of self assembly, jumping and climbing. The new move out is fitted with a flywheel and can reach speeds of up to 20,000 revolutions per minute allowing it to create its own angular momentum.

To help the M-Block move from one location to another it is also fitted with magnets on each corner as well as its flat faces, allowing modules within the robot to change location. Watch the video after the jump to learn more about these unique and fascinating M-Block robots. 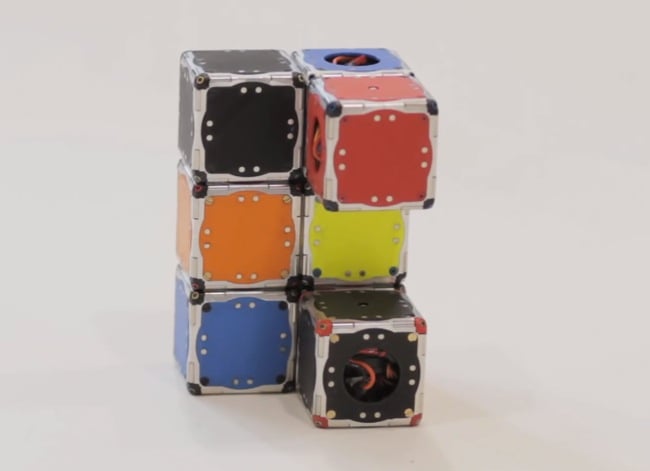 The M-Block robots are cubes with no external moving parts and have been created by Roboticists at the Massachusetts Institute of Technology. Daniela Rus, a professor of electrical engineering and computer science and director of MIT’s Computer Science and Artificial Intelligence Laboratory (CSAIL) explains:

“It’s one of these things that the [modular-robotics] community has been trying to do for a long time,”-“We just needed a creative insight and somebody who was passionate enough to keep coming at it – despite being discouraged.”

The M-Block robots are even able to move from one location to another while suspended upside down from metallic surfaces and any two cubes are able to attach to each other using the corner and face magnets.

A full presentation will be shown at the IEEE/RSJ International Conference on Intelligent Robots and Systems next month. For more information on the new M-Block jump over to the MIT website for details.