3D Gesture control represented in movies such as Minority Report starring Tom Cruise is always great to see and normally so far fetched that real-life technology takes years to match the movie.

Well a new 3D gesture control system designed ad developed by Fraunhofer is looking to make the Minor Report system resemble an old Windows 3.1 computer. Check out the video of the system in action, after the jump. 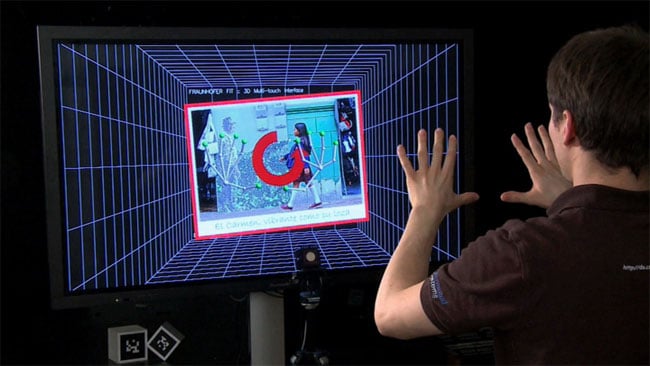 Fraunhofer FIT has developed the next generation of multi-touch environment, one that requires no physical contact and is entirely gesture-based.

This system is capable of detecting multiple fingers and hands at the same time and allows the user to interact with objects on a display. Allowing users move their hands and fingers in the air and are automatically recognised as gestures.

n this film Tom Cruise is in a 3-D software arena and is able to interact with numerous programs at unimaginable speed, however the system used special gloves and only three fingers from each hand. The FIT prototype provides next generation of gesture-based interaction far in advance of the Minority Report system using both hands and all 10 fingers. Using 3D cameras to track using the time of flight principle to calculate the users hands locations and gestures.

Via DVICE Via Alpha Galileo