The UK Royal Mint estimates that about 3 percent of all £1 coins in use within the UK are now forgeries and this is partly due to the length of time that the coin has been in use since its launch over thirty years ago.

Today the UK Royal Mint has unveiled the new £1 coin that has been in development for some time and now includes new security features such as a bi-metalic construction and a 12 sided two colour design. 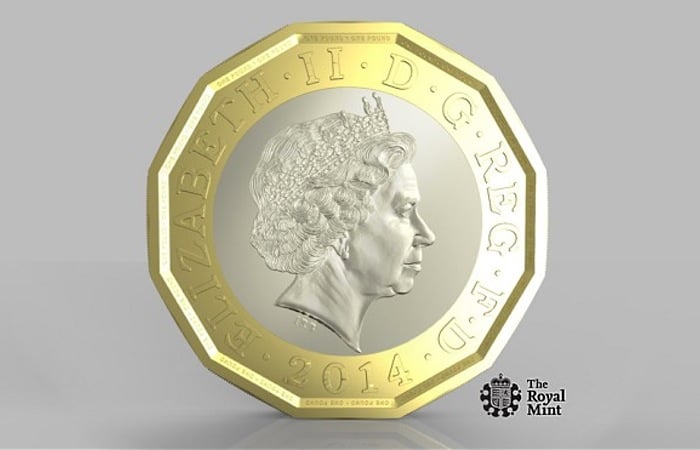 The new £1 coin also includes the Royal Mint’s new iSIS technology, or Integrated Secure Identification System. The iSIS technology comprises of three tiers of banknote-strength security enabling the coin to be authenticated using high-speed automated detection at all points within the cash cycle reducing the likelihood of forgeries slipping into the cash system.

A public design competition for the new £1 coin will be held at a later date to choose the design for the reverse, or ‘tails’, of the coin. The new £1 coin is expected to be introduced in 2017.

“The new £1 coin also pays a fitting tribute to Britain’s heritage. It is the same shape as the 12-sided threepenny bit, which was in circulation from 1937 until decimalisation in 1971.
The threepenny bit was in the first group of coins ever to feature the portrait of HRH Queen Elizabeth II.

The new version coined in 1953 bore a design of a Tudor chained portcullis, which was inherited by the 1p piece after decimalisation and remains on the coin today, as well as being the badge of the Palace of Westminster.

The threepenny bit was the first British coin to use a 12-sided shape which enhanced its popularity during the Second World War, as its distinctive size and shape made it the easiest coin to recognise during the blackout.

By the time of decimalisation 1.2 billion had been issued for circulation.”