One that was put forward last September involved lengthy stretch of rail and a space vehicle attached to a scramjet. Can you form an interesting picture in your head now? 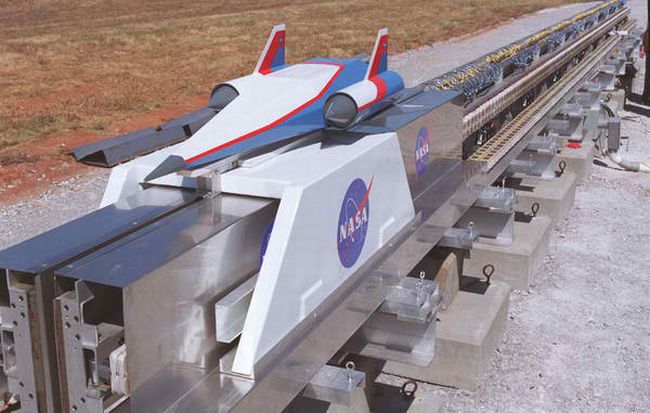 To answer Prez Obama’s demands for a cost-efficient method to reach space and send stuff up there, NASA’s vaunted engineers have devised a fairly complex but economical method whose only shortcoming is a successful test  or two.

What they envisioned is launching a supersonic jet that can reach Mach 10 off a two mile rail track. The jet is propelled by lots and lots of electromagnetic force, sending it screaming into the starry heavens until it reaches the right altitude for its package to separate and independently launch. Once the scramjet is on its way home, the package is busy reaching Earth’s orbit. Easy, right? Right!?

That’s because enumerating the procedure is effortless while setting up all the hardware is going to take a few laborious years.

The missing pat of the equation is the linear motor that will convert so much horsepower into enough thrust to send the scramjet zipping through the rails and into the skies.

Then again, the Russians are always willing to accept cash for rocket launches.