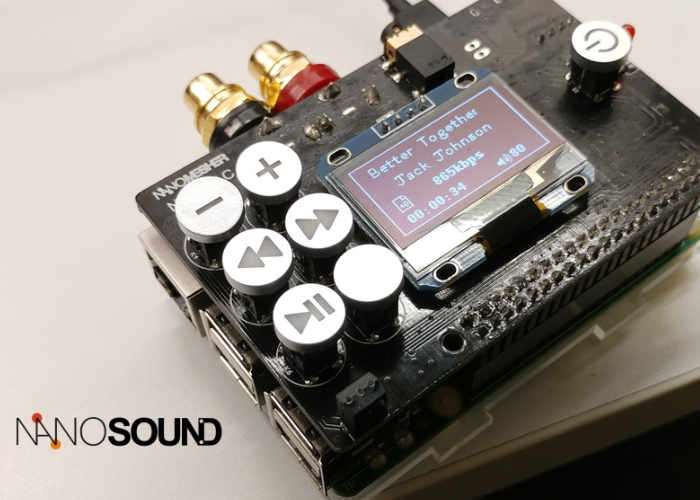 Watch the demonstration video below to learn more about the Raspberry Pi NanoSound add-on board which has taken to Kickstarter this week to raise the required funds it needs to make the jump into production.

NanoSound is fully customizable and programmable! we take full advantage of the Raspberry Pi’s open architecture.

• The 6 buttons are simple GPIO buttons. Python source code will be provided to read button events.
• The IR receiver and control is LIRC compatible. Lircd.conf will be provided to read button input.
• The 1.3″ OLED display is using i2c. The python display driver code is open sourced.
• The onboard on/off switch uses the same design and software as our first kickstarter project. It has an attiny85 onboard and is open sourced.

NanoSound is a Raspberry Pi audio add-on board for audiophiles. While it works out of the box running volumio & kodi, it is designed to be fully customizable and configurable by taking advantage of Raspberry Pi. Yes, it works out of the box with Volumio & Kodi.  A pre-configured Volumio & Kodi image will be available for download.  Just plug NanoSound onto the Raspberry Pi, assemble the included mounting screws, insert the SD card and it’s done!

For more information on the new Nanomesher NanoSound board jump over to the Kickstarter website for details by following the link below.  If you enjoy building Pi projects you might be interested in our comprehensive list of Raspberry Pi displays, HATS and small screens.