I am a big Pac-Man fan as most gamers that grew up in the 80’s are. The original arcade version was one of the first video games I ever played. Pac-Man has been into all sorts of games and other media since it first debuted so many years ago and Namco has unveiled the latest mobile game featuring the yellow guy. 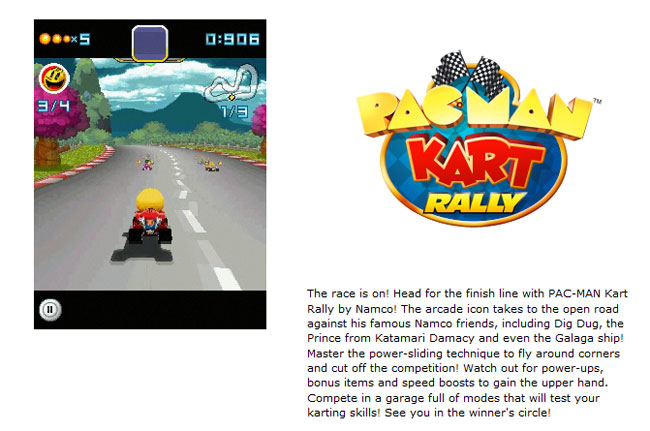 The game is called Pac-Man Kart Rally and it will be offered on just about every mobile platform there is. The game will come for devices supporting Java and BREW, as well as Blackberry phones and Windows mobile devices. An Android version will land early next year. There isn’t a mention of an iPhone version, but I would bet there would be one.

The game has some of the legendary characters from the arcade days including PAC-MAN, Taizo Hori from DIG DUG, the Prince from Katamari Damacy, Susumu Hori from Mr. Driller and the Fighter from Galaga and more. The game has 12 tracks with five game modes. Each character has different attributes and will affect how the kart handles.