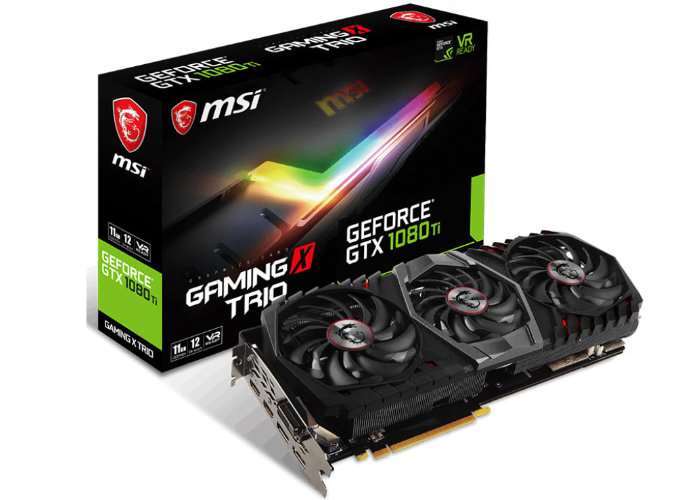 Both cards are fitted with Military Class components and feature an overclocked mode that is capable of providing a Boost Clock speed of 1683 MHz, base clock speed of 1569 MHz and a memory frequency of 11,124 MHz.

Unfortunately no details on pricing or specific availability have been announced as yet but you can expect MSI to make the cards available to purchase worldwide very soon.

– MSI’s reputation in thermal design is well-known to be excellent. The improved TRI-FROZR design on the GTX 1080 Ti GAMING X TRIO utilizes two 10cm and one 9cm TORX 2.0 Fans combining the advantages of both traditional fan blade and dispersion fan blade, generating huge amounts of airflow while remaining virtually silent. Two 8mm SuperPipes transfer heat much faster to the fins, enabling up to a whopping 300W of heat dissipation.

– Equipped with Military Class components, the MSI GTX 1080 Ti GAMING X TRIO is built to deliver the best quality and stability. The components have gone through rigorous testing by a third-party laboratory to pass the military standards. Hi-C CAP cores, SFC, and Solid CAP, each aspect of the TRIO ensures the best possible performance.

The full specifications jump over to the official MSI website below.