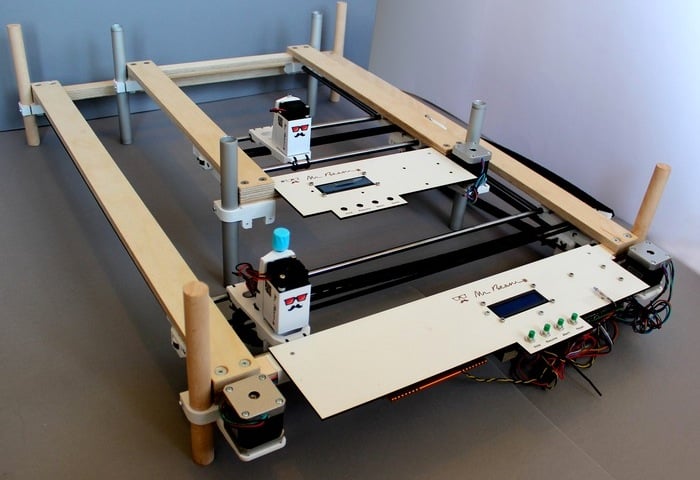 Makers looking for a desktop laser cutter and engraving machine, might be interested in a new project which has launched over on the Kickstarter crowd funding website this week to create, Mr Beam.

Mr Beam is a laser engraver and cutting machine which is powered by the Arduino platform and is capable of cutting paper, foil, cardboard, foam rubber, foam board, felt, leather and even chocolate. Check out the video after the jump to live more about this unique and interesting project.

The creative team of developers behind Mr Beam explain : “Our motivation for Mr Beam, was to maximize the working area while keeping costs to a minimum. In addition, we wanted to make it portable, easy to build and simple to use. We have made great progress on Mr Beam’s development in the last few months, now we need your support to make it happen and be as awesome as we want it to be.

We have just finished our third prototype of both Mr. Beam Junior and Senior. These prototypes perform successfully with different materials and setups. However, we are still working through the following issues:

#01 shield Mr Beam’s custom Arduino shield is performing well on driving the laser diode and stepper motors. However, we still need to iron out some minor bugs and go through one or two additional prototypes of the board, including QA cycles.

#02 design While building the 3rd prototype our main focus was on the function of the laser cutter and experimenting with size and portability. The design of Mr Beam is light, functional and portable, but we think we can improve certain issues. We want to reduce the amount of parts, to make it even easier to assemble. Additionally we want to experiment with other materials for the frame. In general we want to make it more appealing.

#03 software The software operating Mr Beam allows the user to control the device. The web interface can already be used to select motifs and start the cutting process. We would like to add important features, for example the ability to easily position, rotate and scale the motifs.”

The Mr Beam project is currently over on the Kickstarter crowd funding website looking to raise enough pledges to make the jump from concept to production.

So if you think Mr Beam is something you could benefit from, visit the Kickstarter website now to make a pledge and help Mr Beam become a reality from just $549 for the smaller Mr beam cutter.