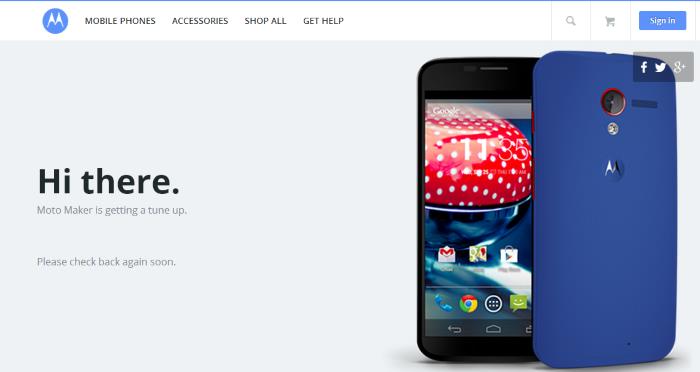 If you visit the Moto Maker website, you’ll be greeted with a message that it’s getting a tune up. While it’s mere speculation, there’s a chance we may get to see new handsets up on the website when it comes back, or it could merely be just a maintenance update.

Motorola has scheduled an event next week, but the company is not going to IFA 2014 in Berlin. The company has already sent press invites to the media about their event on September 4th, where the company is expected to launch a number of devices.

Rumors suggest we may get to see a new Moto X, Moto G2 and the Moto 360 smartwatch — even the invite they sent in tease these products. Although they can add the devices to the store without taking it down, it just create a hype and attracts more people to begin with their guessing games. Usually, Apple do something like this — taking down its online store before a big product launch.

Mark your calendars for September 4th as we’re going to see a number of new devices from the company. What do you think? Is Motorola getting ready to announce new handsets or is it just for maintenance? Sound off in the comments below.