HTC Desire 8 has leaked quite a few times in the past few days. Earlier today, we came across some specifications of the alleged handset, giving us a preview of what it could bring at the table.

If you don’t remember, HTC did tease the handset a few days back, and now, the company is with more press renders of the alleged HTC Desire 8, giving us another look at the upcoming handset ahead of its launch at the Mobile World Congress 2014. 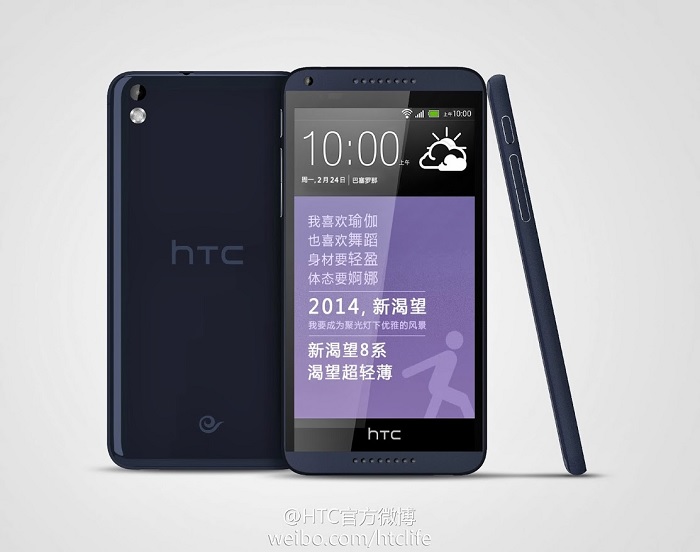 The images were posted by HTC on the Chinese social networking website Weibo, giving us a glimpse of the design of the HTC Desire 8, which looks similar to what we’ve already seen before, in different colors. In addition to white, HTC Desire 8 may launch in some new colors including a dark blue color (as seen above), as well as a few other color combinations as well.

HTC Desire 8 is expected to come with a 5.5-inch Super LCD2 display sporting a resolution of 1280 x 720 pixels with 1.5GB of RAM and 8GB storage with a microSD card slot for expandable memory. The handset will be powered by a quad-core Snapdragon 400 chipset clocked at 1.6GHz, 13MP rear camera for photos and videos with a 5MP front-facing camera, BoomSound and should come with Android 4.4.2 KitKat with Sense 6.0 UI pre-installed.

Here are some more images of the alleged HTC Desire 8 that surfaced from Chinese shores.

The handset is expected to see the light of the day next week in Barcelona. Stay tuned as we’ll update you as soon as it gets official.