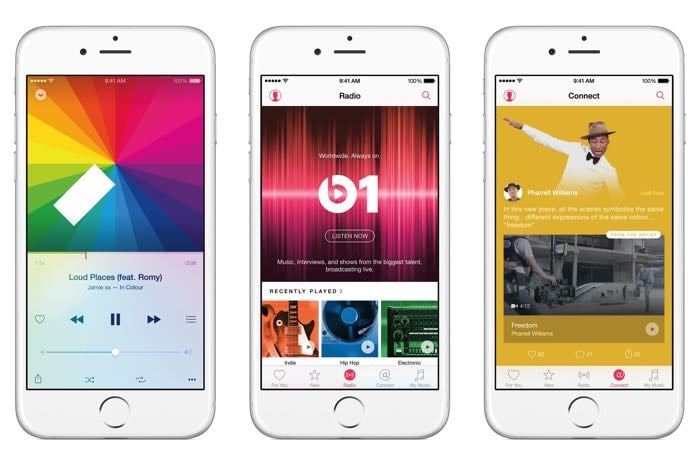 Yesterday we heard that Apple Music would be getting a revamp at this years WWDC in June and now we have some more details on what changes will be coming to Apple’s streaming service.

One of the major changes that will be coming to the update Apple Music is a new User Interface (UI) and now we have some details on what changes will be made to the UI.

According to a recent report from Mark Gurman of 9 to 5 Mac the new UI will get rid of the current colorful and transparent design, instead it will be much simpler with black and white backgrounds and text.

At the moment in the current Apple Music UI when an album is displayed the colors change to match the color used in the album art, instead there will be simpler colors with more focus on the album art which will now be larger than the ones that are displayed at the moment.

Another new change to the UI is that it will support 3D Touch for shortcut previews and also for sharing tracks.

Apple’s San Francisco font will be used for menus and tabs and these will be highlighted in bolder text than the current text used in the app.

Apple will also make some changes to their ‘For You’ feature which shows you tracks, albums and artists that you may be interested in based on your history, this will apparently be a more prominent feature within the app.

Another new feature that is coming to Apple Music is integrated song lyrics, this is a feature which Apple is apparently working with the record labels on and this will be rolled out gradually.

Whilst the new Apple Music streaming service will be announced at WWDC 2016 it wont launch until iOS 10, this is expected to land some time in September along with the new iPhone 7 and 7 Plus handsets.

It will be interesting to see if these new features and the new design will improve the company’s music streaming service.

At the moment there are 13 million paid subscribers which Apple has managed to gain within the last twelve months. Apple has hundreds of millions of iTunes users, probably around 1 billion, so it have a massive amount of potential customers that it could sign up to its music streaming service.