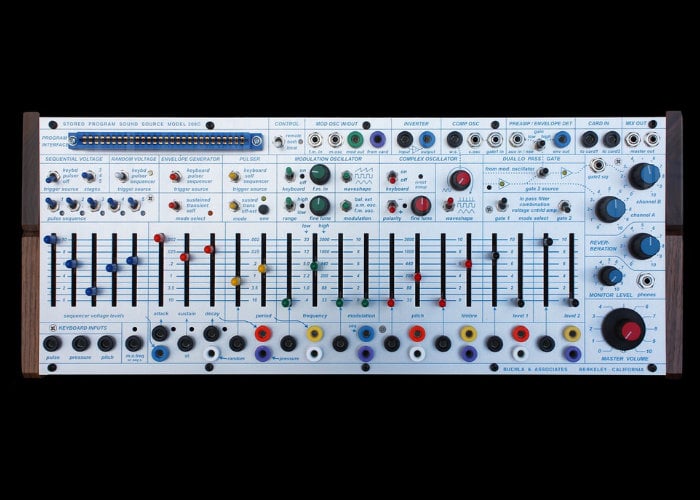 Buchla EASEL COMMAND is a new modular analog synthesizer Created to provide musicians with an evolution of the legendary modular analog synthesizer by Don Buchla. Launched via Kickstarter this week the 208c Synthesizer is now available to back with earlybird pledges available from $2,599. Watch the video below to learn more about the newly updated 208C in a standalone desktop form with MIDI and CV control.

– MIDI input(USB B/DIN) standard on Easel Command, optional on 208C.
– 2 – 1/4″ Audio outputs (Easel Command only)
– 1 – 3.5mm 1v/oct input (mixed to keyboard input) (Easel Command only)
– 1 – 3.5mm Gate input (turned into Buchla keyboard pulse with sustain) (Easel Command only)
– MIDI A (USB Host) optional expansion port.
– Five additional audio connections to get independent inputs and outputs from the oscillators and the gates, plus an FM input to the modulation oscillator.
– Five additional banana CV connections to control knobs and faders and ability to send pulses independently to different inputs.
– If no aux input is present, analog white noise is generated (using the 266 circuit).
– A more logical layout of of the top row.
– A power/control mode LED indicator.
– Pulser now has a dedicated single pulse switch and mode distinction
– The modulation oscillator section is now green, so that each main section has its own color.
– The listed oscillator frequencies are more accurate and the scaled fader input range is trimmable from the old range to 1.2v/oct.
– You can trim the new modulation oscillator and envelope generator inputs to work with the typical input ranges you desire.
– You can trim the oscillators to your desired volts per octave range for both the keyboard and the fader inputs.
– You can also reduce the gain on the gate 1 input if you have an unusually hot, non-Buchla input.
– One single circuit board allows it to be modular case friendly and easier to service; the 208c module can fit into a 200e case.
– Switches and jumpers for those who want to use the new banana inputs —those for the modulation oscillator and sustain— to control the sequencer stages instead.
– Standard headers for the program card connector that allow us to develop future iProgramCard-like preset control from inside the unit.
– New connectors allow our plug-in MIDI interface and provides an optional stereo digital fx option (coming as an optional add-on in the future)
– Actual stereo. The 208 was always a mono synth, but if you plug in a stereo digital fx (coming as an optional add-on in the future), you’ll get stereo outputs on the MIX OUT and headphones.
– A new power connector for more cable length and case flexibility and removability and one that’s already compatible with the more recent revisions of the Easel power board.