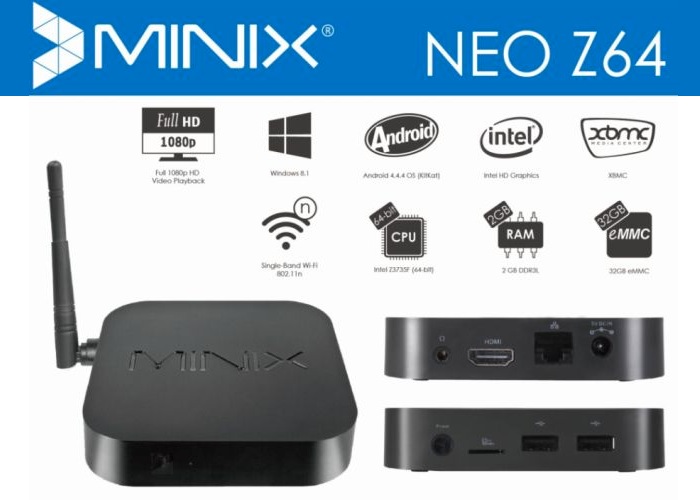 Minix has this week added a new addition to their range of mini PC systems, in the form of the newly launched Minix Neo Z64 which is capable of running either Microsoft’s latest Windows 8.1 or Google’s Android operating system.

The new mini PC has been designed to provide users with a fanless low-power system that is powered by a Intel Atom Z3735F quad-core processor supported by 2GB DDR3L of RAM.

Other features of the new Minix Neo Z64 include 32GB of built-in internal eMMC storage together with a microSD card reader that allows you to expand this further when required. Ports and connections on the mini PC system include 2 x USB 2.0 ports, HDMI output together with 802.11n and wireless connectivity.

The Minix Neo Z64 will be supplied and shipped with Google’s Android 4.4 KitKat operating system installed but thanks to its x86 processor you can also install Windows 8.1 and Minix is currently working on an option for enable users to install the operating system themselves.

The new Minix Neo Z64 mini PC is priced at $129 and is priced at a lot less than the recently launched Zotac ZBOX PI320 which is thought will sell for $199. However that system from Zotac is supplied pre-installed with Microsoft’s Windows 8.1 operating system.