When Minecraft first appeared on the gaming scene, I thought it was going to be a gimmick. Yea, the game was genre defining and was clearly going to leave a lasting mark on the gaming industry, but I didn’t think the game itself would thrive for as long as it has. Part of its continued success is the creative community of gamers that continue to churn out wonders like the steampunk tortoise named Atropos. 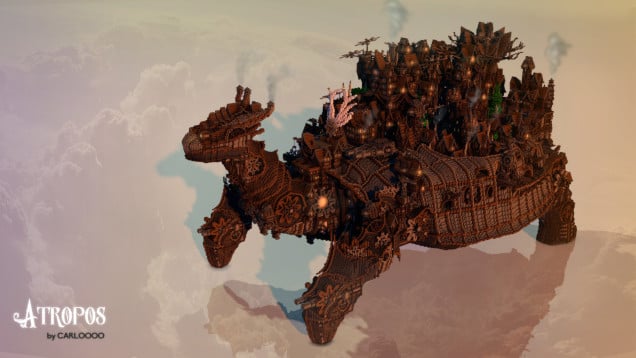 It’s a steampunk version of the giant tortoise’s you’d find in Asian mythology and various anime/cartoon series like The Legend of Korra. This intricately designed monstrosity took five months to build and is currently downloadable for PC Minecraft players. It doesn’t move but it’s still an amazing feat to accomplish in the game over such a relatively small amount of time.

As I’ve said before, I never got deep into the game. It was mildly amusing for a bit, but I’m a fan of games with a little more story-based content. Case in point, I’m looking to pick-up Persona 4 again and will be playing it for a quite a while.

Are you a major Minecraft player? What do you think about the steampunk tortoise?