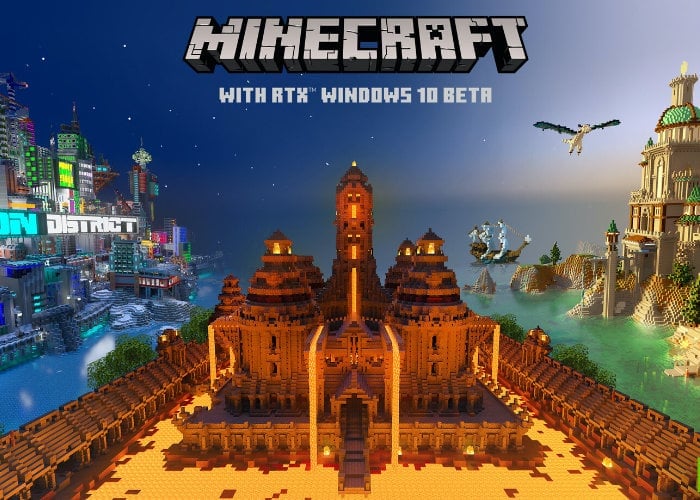 Minecraft RTX will be available in open beta in a few days time from April 16th 2020 and as a free update later this year to users that own Minecraft on Windows 10. The new Minecraft Ray Tracing technology introduces NVIDIA DLSS 2.0 to the game.

If you are interested in taking part in the open beta you will need to sign up for the Minecraft Windows 10 RTX beta through the Xbox Insider Hub on April 16th 2020. The beta worlds will be downloadable for free from the Minecraft Marketplace on the same days and those taking part will also require a GeForce RTX 2060 GPU or higher and the latest NVIDIA Game Ready Driver. Minecraft rendered in real time with RTX-accelerated ray tracing, physically based materials and NVIDIA DLSS 2.0 can be seen in the new gameplay trailer below.

The six new worlds will be downloadable for free from the in-game Minecraft Marketplace and include:

“What Minecraft with RTX introduces to the game can only be described as mind-blowing,” said RazzleberryFox, CEO at Razzleberries, a founding partner and industry leader on the Minecraft Marketplace. “The added dimension these incredible visuals add to Minecraft has reinvigorated our collective creativity and enabled us to create amazing new worlds and experiences for Minecraft that just were not possible before.”