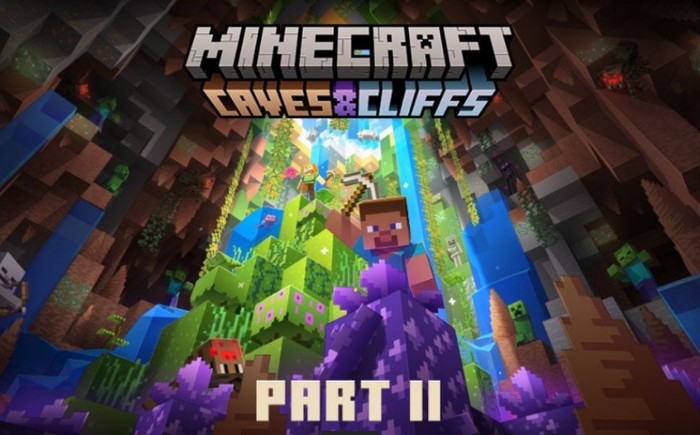 This week Microsoft has made available the second part of the Minecraft Caves and Cliffs update making it available on the Xbox Series X, Xbox Series S, Xbox One, PlayStation 5, PlayStation 4, Nintendo Switch, iOS, Android, and Windows 10 and 11 – and Minecraft: Java Edition on Windows, macOS, and Linux. The new Minecraft Caves and Cliffs Part 2 update rolled out this week and is part of the Minecraft: Bedrock Edition offering a wealth of new mining ores to explore in cave biomes and more.

“Scale bigger mountains, unearth elaborate caves, and mine large ore veins in Part II of the Caves & Cliffs Update! Discover lush cave and dripstone cave biomes, increased world height, and updated terrain generation. Light up your world with candles to show what a savvy spelunker and master mountaineer you are! Where are you going to begin? Are you going to channel your inner spelunker and burrow into elaborate cave systems? Will you be scaling the higher-than-ever mountains? Maybe you’ve been dreaming big and will go straight into mining large ore veins? You can find me in a dripstone cave, challenging the stalagmites to a staring contest.”

“As you can tell, there is so much to explore in Part II. The Overworld is getting new terrain generation, an increased world height, dripstone caves, lush caves, larger ore veins, candles, and friendlier goats. OK, that last one was technically a lie but only because I am now living in constant fear of being rammed off the side of a mountain. Fun fact – this concern predates Caves & Cliffs Update: Part I!”