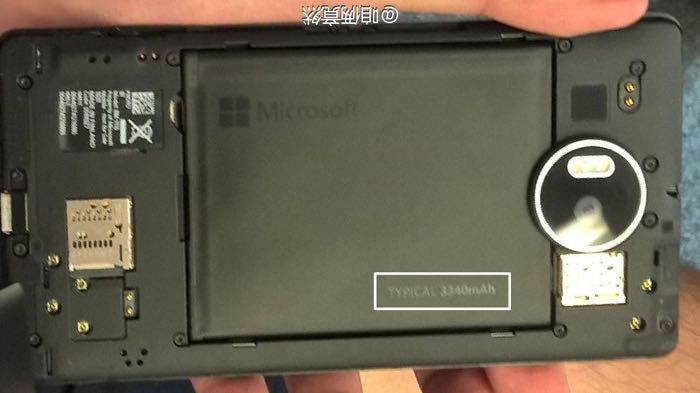 The Microsoft Lumia 950 XL will be announced along with the Lumia 950, Lumia 550 and the new Microsoft Surface Pro 4 at Microsoft’s press event tomorrow and now we have some more details on the handset.

A photo of the new Lumia 950XL was posted on Twitter and the photo reveal that the handset will feature a 3340 mAh removable battery.

We previously heard a number of other specifications on the device, which will include a 5.7 inch display which will feature a Quad HD resolution of 2560 x 1440 pixels, the device will be powered by an octa core Snapdragon 810 processor from Qualcomm.

Other rumored specifications on the handset include 3GB of RAM and 32GB of built in storage, the device will also come with a microSD card slot for expansion.

We also heard that the new Lumia 950 XL will feature a 20 megapixel camera on the back and the device will come with Windows 10 Phone.

We will have full details on this new Lumia 950 XL smartphone and Microsoft’s other new devices when they are made official tomorrow.