The surprising part is how much free swag Microsoft is dangling in front of users. Okay, so Internet Explorer isn’t exactly the sexiest browser out there. Some would even argue it never was, but hold on. Microsoft is pretty hot on Internet Explorer 9 and to entice its use, why, Microsoft is going all out. Tickets, subscriptions, etcetera etcetera. More juicy details after the jump. 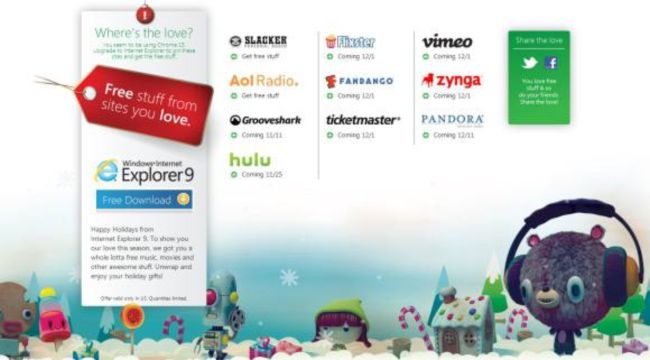 This must be a holiday thing, right?

Indeed it is. The big reveal came via an IE9 page earlier this month. The freebies are nothing to sniff at either. On top o a $5 Fandango ticket, there’s entire months worth of free subscription to Slackers Radio, AOL Radio, a month of Hulu Plus, and a Live Nation Ticketmaster discount. That’s just the tip of the iceberg though.

The awful part is this incredible promo is only available in the United States. Bummer. But there’s always a silver lining. The promo has no official end date, so it will likely extend till Christmas.