Of course, real cooks will sniff at the idea of precisely measuring ingredients. But for those just going about the business of improving their culinary chops, the Maxim 2 in 1 could prove mighty useful. What it is is a measuring cup and weighing scale in one. 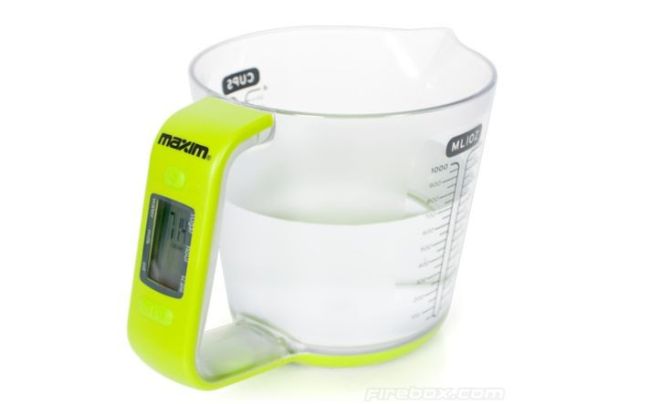 It might not be the ideal tool for cutting edge fusion cuisine, but with the Maxim in a kitchen, you’re assured a useful weapon in your food preparation arsenal. The measuring cup part is obvious, but its dual role as a scale is, uh, just as obvious. Instead of pouring the liquid, place the portions that need measuring inside the sizable plastic cu and a built-in scale will indicate the weight in a small LCD screen n the handle. Easy, right?

A few words of warning: very hot liquids could melt the Maxim 2 in 1’s cup, which is plastic. Also, don’t soak this in water as it might damage the LCD screen and its electronic parts.

As a battery powered device, the Maxim 2 in 1 uses a CR2032 battery. It’s currently selling for an affordable $34.

If multi-purpose kitchen equipment is the wave of the future, an somebody please make an cutting board that doubles as a tablet PC? Okay,wait–that’s a bad idea.