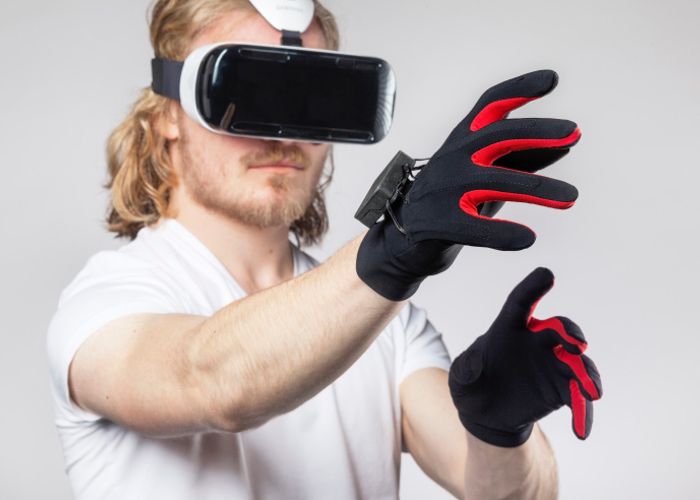 Next year is going to be a big year for virtual reality with the highly anticipated launch of a number of VR headsets including Sony’s Project Morpheus, Valve’s Vive and Oculus VR’s Oculus Rift to name a few.

Earlier this month Oculus VR unveiled their new virtual reality Oculus Touch controllers at E3, that have been designed to provide a more immersive experience whilst using their VR headset. However they are not the only solutions under development to being able to interact with a virtual reality environment.

Manus Machina it is also developing flexible, finger-sensing virtual reality gloves that are designed to be worn in conjunction with a VR headset, enabling gamers to be able to view their hands and fingers within the new virtual reality environments.

Virtual reality gloves are not a new creation and a number of different companies and research labs have been developing a range of solutions. However most solutions have been developed for industry while Manus Machina is hoping to create the first widely adopted consumer hardware that will complement the new the headsets preparing to launch in 2016, specifically for the launch of virtual reality gaming and entertainment. Co-founder of Manus Machina Stephen van den Brink explains a little more :

It’s basically a glove that accurately tracks what your hand is doing. It’s using flex sensors on each fingers, so it senses the bending of the fingers. And it uses an IMU module on the back of the hand which tracks the rotation, the yaw, the downward rotation of the hand. It has nine degrees of freedom.

Data gloves already exist… a lot of universities already made a glove… and there are a lot of mock-up data glove suits already around. But they cost $10k up for each glove.

This E3 Oculus showed its first games that will be released with VR, with the big titles. Like Eve, for example. But it’s all still played with an Xbox controller. And at this moment — this is the year, or the next year is going to be figuring out how do game developers want to have hand presence in games, or want to have kind of a gesture-based system, because you don’t actually have to have hand presses in a game you can also do gesture-based.

For more information about the new Manus Machina VR gloves jump over to the Tech Crunch website for an interview with their creators via the link below.