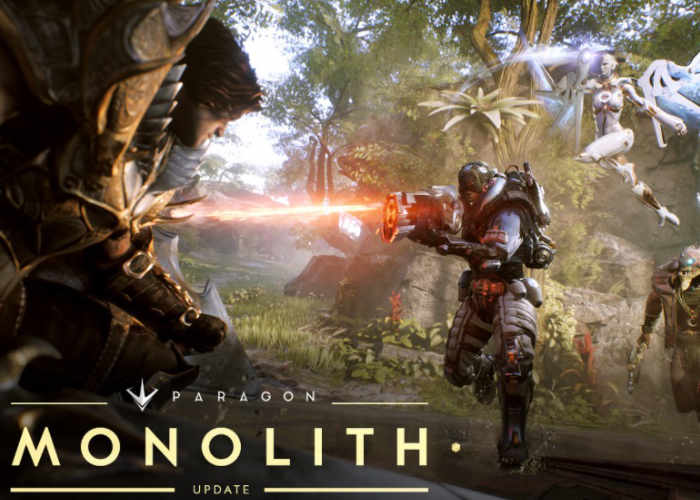 Cameron Winston Lead Hero Designer on the Paragon game has taken to the official PlayStation blog today to reveal more details and release a new trailer for the new Paragon Monolith Update which has been rolled out today and is now available to download.

ParagonAs a free to play game and the new update as you might have already guessed is also free and includes a number of new tweaks, enhancements and features such as fster, more action-oriented gameplay, over 100 updates to cards, as well as changes to armour and damage with every hero being updated.

The update also brings with it a new compact map, all of which can be seen in the official Paragon Monolith Update trailer embedded below.

For Monolith, we want to more solidly deliver on the promise of what we felt Paragon should be. To that end, we’ve turned it up a notch. Gameplay is faster. Specifically, we’re talking about faster movement speed, ability and attack execution speed, and overall game lethality. We feel this direction will help Paragon truly achieve the goal we’ve always had: The MOBA that puts you in the action.

We’ve removed Travel Mode in favor of that increased base movement speed. Once mastered, the new, faster move speeds will prove easier for players to understand in terms of which engagement ranges are safe and which are likely to land them with a free timeout.

We’ve created an entirely new map called Monolith that will become the primary competitive experience for Paragon. It’s about 30 percent smaller than the current map, which we now call “Legacy.” While Legacy is symmetrical, the new map is asymmetrical. This layout, shown below, allows us to create clearer roles for Heroes and defines places for those Heroes. We also want our lanes to be more dynamic, awesome places filled with drama, conflict, big plays, and skilled saves. We think the smaller map with defined spaces and increased movement speeds will help us achieve our goals.