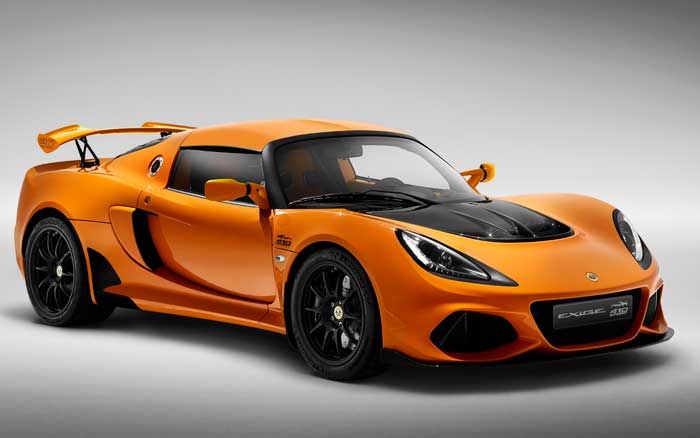 Lotus has announced that it is celebrating the 20th anniversary of the Exige with a special edition called the Lotus Exige Sport 410 20th Anniversary. The exclusive model has enhanced exterior and interior specifications with a higher level of standard equipment. It also features the unique 20th Anniversary black silhouette logo that showcases the original car from 2000.

The special edition cars are covered in retro paint colors to pay tribute to the original Exige Series 1, including Chrome Orange, Laser Blue, Calypso Red, Saffron Yellow, Motorsport Black, or Arctic Silver. The first three colors are bespoke for the Anniversary model only. The special edition cars come with a body-colored roof, side air intake pods, and rear wing. They also feature a black shark fin rock chip protector ahead of the rear wheel.

Inside, the vehicle has a choice of different colored Alcantara trims with the seat decorated with paneled stitching echoing the original car. Standard equipment includes Nitron three-way adjustable dampers with variable bump and rebound settings. The front splitter, front access panel, and rear tailgate are all made from carbon fiber. Also included is standard is a DAB digital radio with Bluetooth, cruise control, ultra-lightweight forged alloy wheels, and an Alcantara steering wheel. Titanium exhaust, carbon fiber sill trim, and a lightweight lithium-ion battery are all standard. Pricing is set at £79,900, with cars delivered later this year.