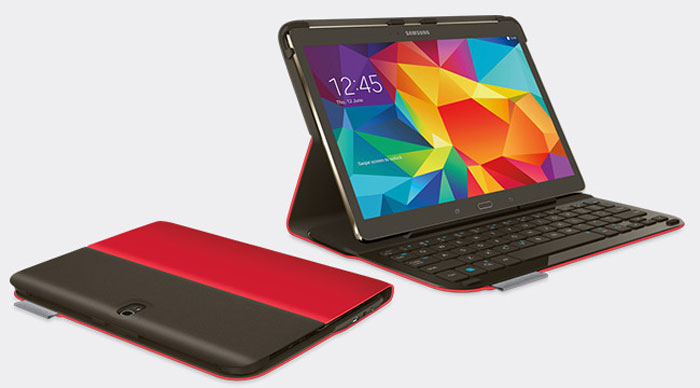 If you are tired of boring and plain black accessories for your tablet, Logitech has rolled out a new accessory for the Samsung Galaxy Tab S 10.5 tablet that has some color. The new accessory is a red and black version of the Logitech Type-S case that launched in plain black in June.

Other than the new red color on the outside, the case is the same one that debuted a few months back. The case has an integrated keyboard that connects to your tablet via Bluetooth. It’s designed to prop up the Samsung tablet for easy viewing while you are typing. It’s also designed to protect your tablet from bumps and scratches.

Logitech rolled out the new case at IFA 2014 and the red version of the case sells for $99.99. Power for the case comes from an internal rechargeable battery good for three months of use on a charge. The keyboard case measures 259mm H x 192mm W x 20mm thick and weighs 436 grams. It adds a bit of bulk to the tablet, but the upside to the bulk is that you protect your tablet and get a keyboard for typing.