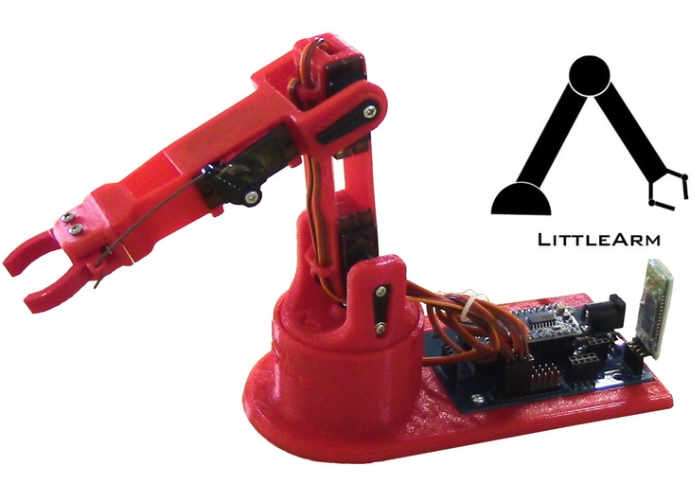 Anyone wanting to learn more about robotics and the Arduino platform may be interested in a new mini Arduino robotic arm which has been created by Slant Robotics, called LittleArm 2C.

The LittleArm 2C has been launched by Kickstarter this week to raise the required funds the team needs to take the robotic arm into production. Watch the demonstration video below to learn more about the 3D printed kit which is available to backfire Kickstarter with pledges starting from just $52.

The development team behind LittleArm 2C explain more about its inspiration and design.

We want to build a STEM kit that gets kids excited about technology. So we have created the LittleArm, a simple, trainable, programmable, Arduino robot arm. In 2016, a guy in a garage built a small robot arm using an Arduino Uno and his 3D printer. After tons of people asked him to turn it into a kit, Slant Concepts put it on Kickstarter. It was funded in under a week and hit more than 260% of it goal by the end.

After sending out those first arms, the feedback started coming in. We are smart enough to listen to the people who are using our stuff. So we took every comment and common problem and eliminated them with extreme prejudice. When we were done we had created a great machine. This is the LittleArm 2C. The desktop Arduino robot arm we created for kids to learn about robotics and technology.

The LittleArm 2C is designed to be the kit that kids can easily use so that STEM classes can implement more robotics curriculum. We are on Kickstarter now to fund the first run of these new arms and develop improved curriculum and content so teachers can easily utilize the LittleArm as a tool in classrooms, to get kids excited about tech.

For more information on the new LittleArm 2C Mini Arduino robotic arm jump over to the Kickstarter website for details by following the link below.