With covetousness, that is. Seen below is the Kobe Bryant version of the new trading cards from Recom, a high tech firm commissioned by Panini America Inc. to add a little 21st century luster to their upcoming card line. 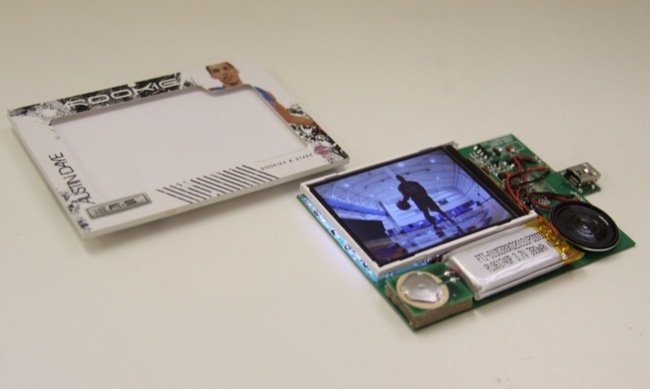 Panini America Inc. has been printing sports-themed trading cards (and stickers galore) since forever. But the new video variants will put a fresh spin on the medium and attract old and new collectors alike. As pictured above, the trading cards, one set featuring basketball players like Kobe Bryant, come with a screen with at least 20 minutes of video. An additional 2 GB of storage space means additional content is savable on the card, which doubles as a USB storage device.

The video trading cards are scheduled for release on June, where they’ll be sold in batches of five and as part of traditional card decks under the Panini Totally Certified Basketball Card line.

To make the cards extra appealing a select few of the already select video trading cards will be autographed and have an accompanying video of them being autographed by the players for maximum authenticness.

The cards will be selling in $20 batches of five across American sports memorabilia outlets come next month.