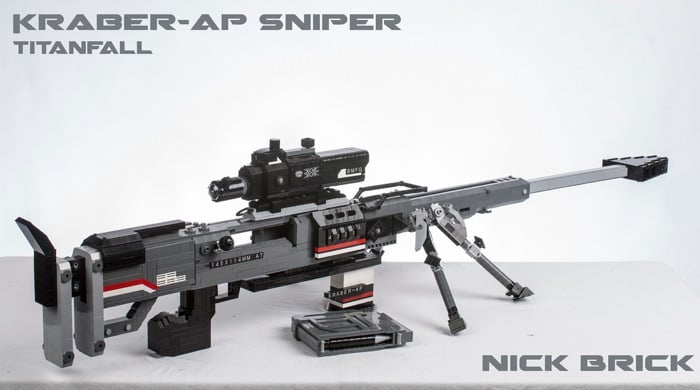 Lego master build and YouTube user Nick Brick has unveiled his latest creation in the form of the life-size 1:1 scale replica in the shape of a Lego Titanfall Kraber-AP Sniper Rifle.

“The Kraber-AP is a straight-pull bolt-action sniper rifle with a side-mounted magazine. As expected from both its large-caliber 14.5x114mm rounds, it has very high damage, able to kill a pilot in one shot. Pilots must lead against moving targets due to the short projectile travel time between the shot and impact (slightly faster bullet speed than rounds from the 40mm Cannon) of the weapons projectiles.”

The Lego replica Includes every detail of its digital original bolt-action one-shot, one kill rifle unlocked at level 44 with the new Titanfall game that was launched on the next generation Xbox One, Xbox 360 and Windows PC earlier this year.

For more photos of this awesome build jump over the Nick Jensen Flickr website where you can see the scale the rifle in all its glory. Great job Nick!