What stands between a pile of Lego bricks and a human being? Imagination, is what. Lego has never failed to unleash the engineering gifts of all sorts of people, from Apple engineers to programmers fixated with guns. Here at Geeky Gadgets the very best Lego builds have always been singled out for praise. Here’s another generous salvo of the same. 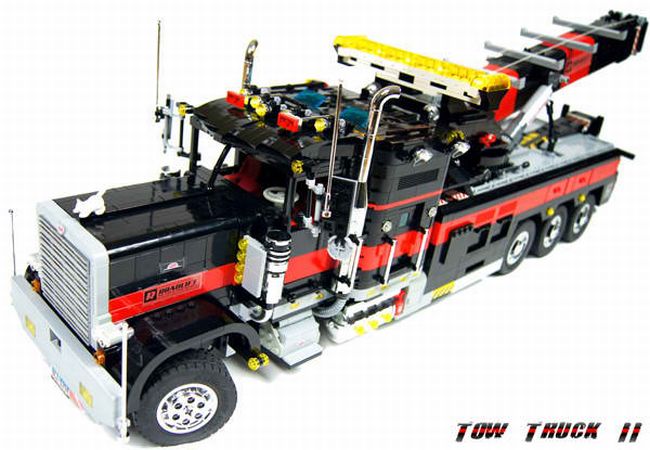 The Tow Truck was inspired by an earlier vehicle called the Black Cat whose understated elegance and mean looks are more than enough inspiration. This Tow Truck is more than just a copy though, as it is capable of moving around and doing work with its crane. We can’t stress this enough: the amount of moving parts involved here is just awe-inspiring.

The machine is capable of 0.35 mph, which is perfectly okay considering its size. It weighs 11 lbs and is fully capable of towing other toy vehicles around, be they HALO Warthogs or a Lego Tank that’s fallen into a ditch.

The man behind this marvel goes by the name Sariel and he is notorious for posting details of his builds online. Go here for the wholescoop and nothing but the scoop.

Hey, hey look! There’s even a small animal on the hood! (Is that a fox?)

Sure, this might come off as silly, but one of these days we’d love to run a story about some guy who just built a UAV from Lego technic.