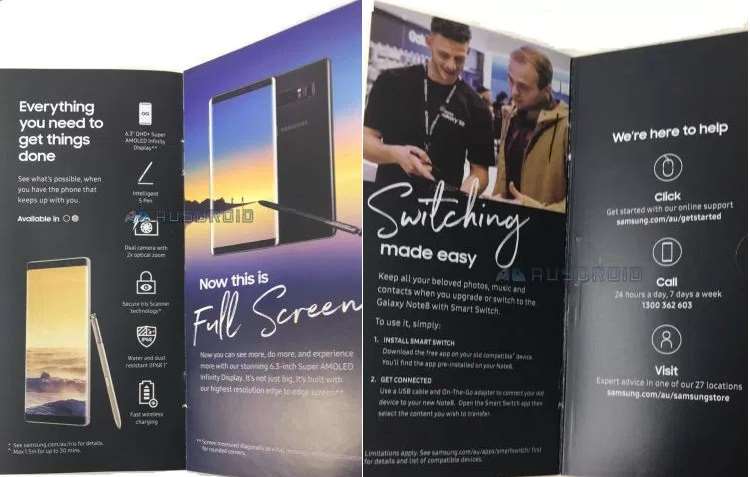 Over the past few weeks, we’ve heard countless rumors about the upcoming Galaxy Note 8, and they will continue until August 23rd where the company is expected to unveil their next flagship device.

Recently, the folks at Ausdroid managed to get their hands on some leaked Galaxy Note 8 material confirming a little more details about the upcoming device.

The leaked brochure reveals that the alleged Galaxy Note 4 will feature a 6.3-inch QHD+ Infinity Display with S Pen support. The handset is also expected to come with an iris scanner and a fingerprint scanner as an added security measure. Additionally, the handset will come with IP68 certification making it dust and water resistant.

As for photographic capabilities, the brochure reveals that the dual camera on the Galaxy Note 8 will have a f/1.7 lenses with support for 2x optical zoom and Optical Image Stabilization. The device will be available in Midnight Blue and Maple gold color option, at least for the Australian markets. The deep blue color option might be limited to specific markets.

August 23rd is just around the corner, and by now, I think we know almost everything the handset will offer when its officially launched across the globe. We’ll update you with official pricing and availability details as soon as they are available.