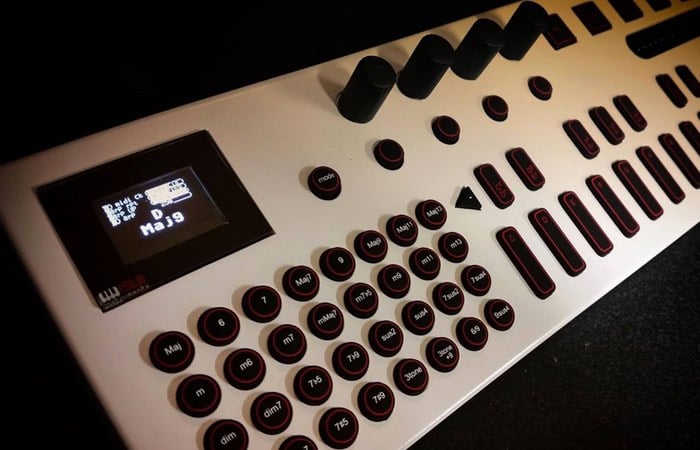 ISLA Instruments have created a new MIDI chord generator which also can be used as a step sequencer and arpeggiator that takes the form of the KordBot, which allows you to store thousands of chords and control them with the touch of a button.

The KordBot allows users to play chords on any polyphonic MIDI capable device and offers 32 built-in chord types including inversions for each. Together with another 8 user-banks for storing custom chord types you might have created, check out the promotional video below to learn more about its features and see the KordBot in action.

For creating fast ideas, ‘Song Builder’ mode lets KordBot automatically pre-select the seven harmonically related chords of a scale known as a ‘diatonic progression’. These are standard chord sequences available from fourty-nine scales and scale modes, such as Major, Minor, Penatonic and Blues scales, Lydian, Phrygian, Aeolian and Locrian modes and more. Exotic scales are available as well, such as Pelog, Hungarian Folk, Balinese and Oriental.

Up to four scale types and key signatures can be selected, accessed from the four chord modifier rows on the left side of the unit. The resulting diatonic chord progressions of each row then form a sort of ‘musical palette’ for inspiring song ideas with the push of a few buttons.

The advanced Arpeggiation unit includes ‘humanisation’ and ‘swing’ functions to vary note velocities and/or note/chord start times and lengths. The arpeggiator has all the usual up/down patterns as well as the ability to store user-created patterns. It may also be syncronised to an external MIDI clock if desired.

Kordbot is not only just a tool for the studio… It’s a truly powerful learning device — KordBot’s illuminated keyboard displays each note of the chords played. This is a great way for users to quickly learn how to play the chords themselves and for quick reference lookup of chord fingerings.

For more information jump over to the Kickstarter website via the link below and make a pledge from $179 to make sure you are first in line for the KordBot.