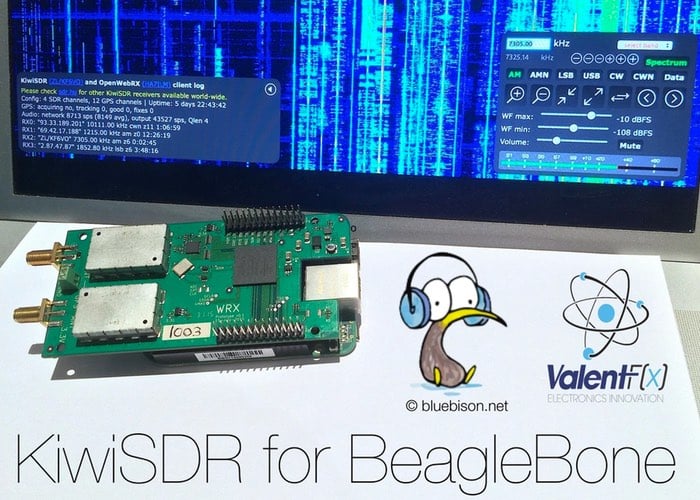 BeagleBone enthusiasts that would like to transform their BeagleBone Black into a wide-band (0-30 MHz) SDR with a multi-user web interface, might be interested in a new piece of system called KiwiSDR which has been developed by Valent F(x) based in Salt Lake City.

The Valent F(x) KiwiSDR system comes complete with a software-defined GPS receiver, and has this month launched via the Kickstarter crowdfunding campaign looking to raise $50,000 to make the jump into production.

KiwiSDR is a software-defined radio (SDR) covering shortwave, the longwave & AM broadcast bands, various utility stations, and amateur radio transmissions, world-wide, in the spectrum from 10 kHz to 30 MHz. The KiwiSDR is a custom circuit board you connect to an inexpensive BeagleBone Black or Green computer. Add an antenna, power supply, internet connection, then install the software package to be running in minutes.

An HTML5-capable browser and internet connection will let you listen to a public KiwiSDR anywhere in the world. Up to four people can listen simultaneously to one receiver — each listener tunes independently.