Earlier this week, Google announced the next version of its mobile operating system, Android 4.4 KitKat. It was announced earlier that the company will give away a shiny new Nexus 7 and Google Play credit in a contest, as the manufacturer released Android branded KitKat bars. 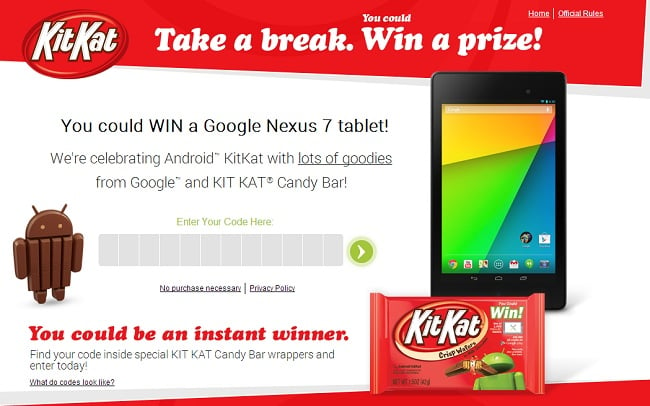 The contest is now live and 1,000 lucky winners could get their hands-on to the new Nexus 7 along with many other goodies. Other goodies include $5 worth Google Play credit and KitKat Mini pouch for 150,000 and 20,000 winners, respectively. The contest will end on 31st January 2014 so make sure you find the Android branded KitKat bar as soon as you can.

All you need to do is find a KitKat bar featuring the Android robot mascot, open the wrapper and enter the code found inside at Hershey’s website (link given at the end of post). In case you don’t know where to find the code, check the link at the end. Good luck, everyone.