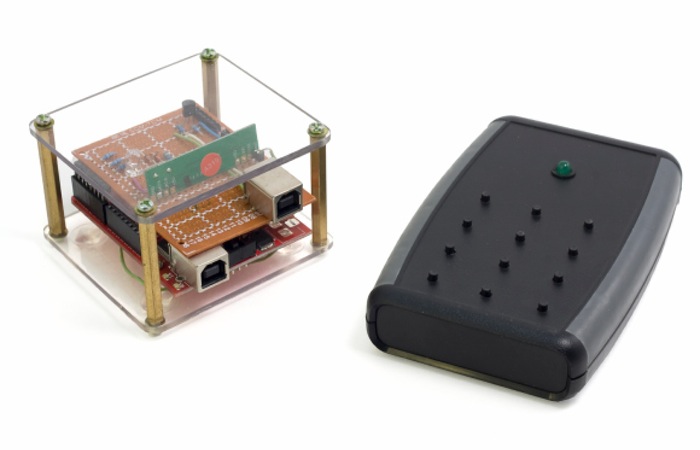 Hobbyists, tinkerers and developers looking for a new project to keep them busy over the weekend holiday might be interested in a new wireless remote control called the keyMote that has been developed to emulate USB keyboard inputs.

The keyMote is a simple wireless remote control that has been specifically designed for computers and allows you to carry out a number of controls that would not normally be available with a standard remote connected to your computer.

The keyMote consists of an Arduino development board, a wireless receiver/transmitter pair combined with another micro-controller hooked up to a battery in the remote. The creator of the keyMote explains a little more on how the system works:

“There are two parts to this system, the remote, which is battery powered, and the base, which is hooked up to a computer. The remote is a simple keypad (In the case of the prototype, its a numeric keypad, but really, it could be any interface) with a transmitter hooked up to it. The base, the other end, is a receiver with USB Human interface device functionality, in other words, a vanilla USB keyboard.

When a button is pressed, the remote sends the identifier of that button to the base which then looks up in a table the keystrokes this identifier is mapped to and sends those to the computer via USB. What button is mapped to what keystroke is entirely configurable using a serial terminal interface (shell) to the base. It can be anything, Ctrl-C, Alt-Shift-F, PageUp, etc. Getting it to interface with your program is then simply a matter of configuring keyboard shortcuts.”

For more information on the new keyMote jump over to the Bits Of Mind website for details.