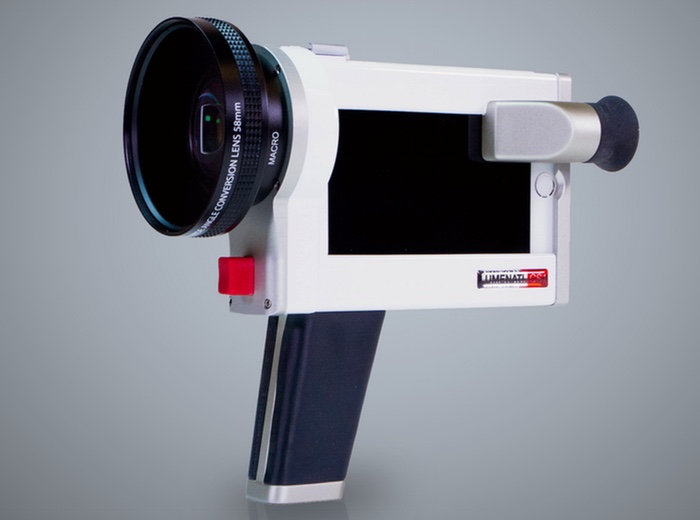 Scott McDonald that has created a very unique iPhone 6 case that takes the form of a  Lumenati CS1 that transforms your modern day smartphone into a retro styled cine camera complete with viewfinder and 58 mm lens.

The Lumenati CS1 smartphone camera case has been designed to connect to your iPhone 6 or next-generation iPhone that Apple will be launching later this year during September to create a classic film camera.

The Lumenati CS1 project is currently over on the Kickstarter crowd funding website and has already raised over $150,000 to make the jump from concept to production. Watch the video below to learn more about the Lumenati CS1 from its creator who explains the inspiration and features you can expect to enjoy whilst using the world’s first cinematic smartcase.

The Lumenati CS1 is currently compatible with the iPhone 6 model. However, backers will have the option of being delivered either the iPhone 6 model or the iPhone 6s model (releases October). We hope to offer options for all sizes and smartphones if we are successful in fundraising.

The Lumenati CS1 combines the technological features of a digital device (film-free shooting, instant sharing and an editing app) with the cool design, ergonomic ease and natural narrative that the lo-fi classic camera is known for.

Cinematographers simply pop their device into the Lumenati CS1 just as grandpa would load an 8mm film cartridge. The lightweight, portable unit allows anyone to frame and film a steady, stable shot with the pull of an intuitive trigger. A cold shoe allows filmmakers to attach lights, microphones and extra handles for sport shooting. The real-time viewfinder allows WYSIWYG capabilities even in bright light, a feature that is elusive to modern mobile devices. Lenses can be swapped to shoot in wide angle, fisheye and telephoto.

So if you think Lumenati CS1 is something you could benefit from, visit the Kickstarter website now to make a pledge and help Lumenati CS1 become a reality.