We just checked the Apple online store, and for many models the shipping date has now been changed from 4 to 5 weeks, this applies to the 64GB WiFi only model and also the 32GB and 64GB iPad 2 with WiFi and 3G. 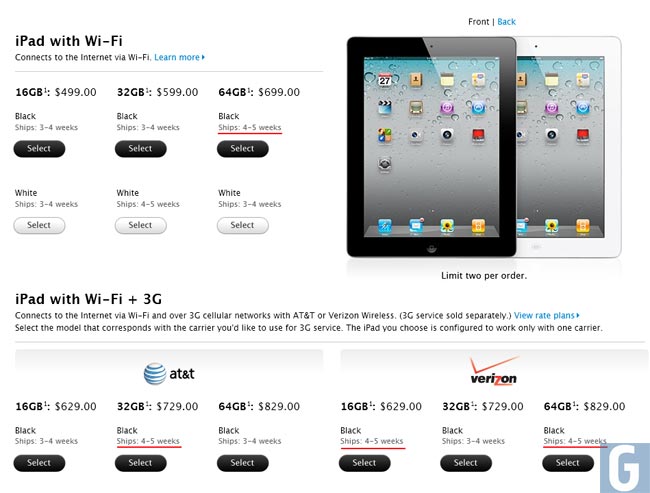 This leads us to believe that Apple has had a lot of orders for the iPad 2, and we suspect the orders they received were way above what Apple had actually expected.

There have been reports from various analysts that Apple possibly sold 500,000 iPad 2’s in the first weekend, we suspected that these figures were very conservative and that when the official figures are announced by Apple they will be closed to 1 million.

It looks like there is now a shortage of iPad 2’s in the US, with demand outstripping Apple’s supply, a 4 to 5 week delivery time is pretty high for Apple for a new device and we are wondering if this will effect the international shipping date of the iPad 2.

The iPad 2 is due to go on sale in Europe and the UK on the 25th of March, will Apple be able to meet orders for this date or will the European launch of the iPad 2 be pushed back?