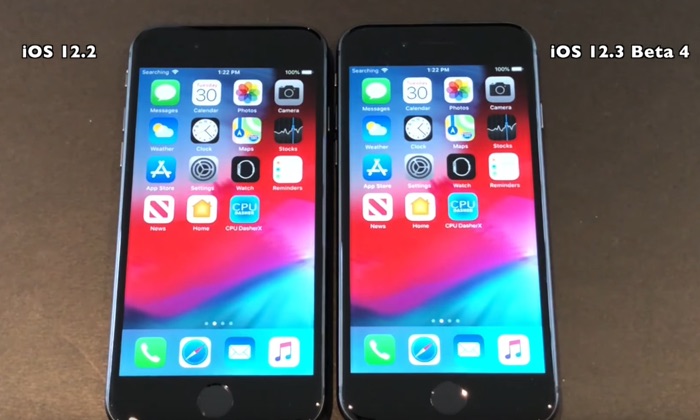 Apple recently released their fourth beta of iOS 12.3 and now we have some speed test videos of iOS 12.3 beta 4 vs iOS 12.2 speed.

In the videos below we get to see iOS 12.3 beta 4 run side by side with iOS 12.2 on a number of devices, this includes the iPhones 5S, iPhone 6, iPhone 6S, iPhone 7 and iPhone 8, lets see if there are any speed improvements in this new beta.

As we can see from the video the handset running iOS 12.2 booted up slightly faster, there are no speed improvements in the various apps, next up is the iPhone 6.

As we can see in the iPhone 6 video, the device running the current iOS 12.2 booted up faster, it also appeares to be slightly faster in some apps, next is the iPhone 6S.

With the two iPhone 6S handsets, the one running iOS 12.2 booted up slightly faster, the apps appear to be about the same on the two devices with no speed improvements, next is the iPhone 7.

The iPhone 7 running the new iOS 12.3 beta 4 booted up faster than the device with iOS 12.2, there are no speed improvements in the apps, next up is the iPhone 8.

In the final video the iPhone 8 running the iOS 12.2 booted up slightly faster, there are no speed improvements in the apps. As we can see from the videos the new beta of iOS 12.3 has not broguht any major speed improvements to the various iPhones.