Who says you can’t build something out of Apple products generations apart? A creative tandem from L.A. just debuted their super high-tech Mac Plus helmet at a party last week and plan on taking the visual showcase to the club circuit. Pictured below; Kid Chameleon (a.k.a. Matt Loniero) rawking out to some mad soundz! 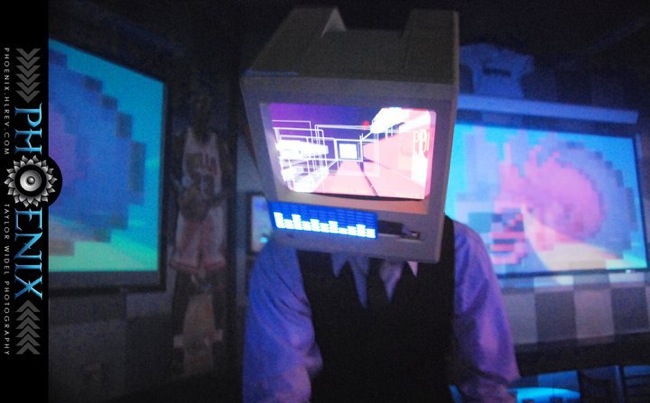 What started as a sculpture project for a university class found its way into Kid Chameleon’s set by virtue of necessity; you can’t put new life into DJing without a little pizzaz these days. Electronics helps and what better way to inspire awesome than combining old Apple with new Apple?

The build itself wasn’t very difficult. Torrence Scoville (the guy who needed it for his sculpture class) bought an old Mac Plus from eBay, gutted it, put in motorcycle helmet padding for a snug fit, then replaced the monitor screen with an iPad. But that’s not all. To wow the dancing multitude at the party Kid Chameleon was scheduled to preside over as DJ, the terrible twosome further pimped the helmet.

Below the iPad screen is a sound activated electro-luminescent patch. The boys then synced projectors and TVs around the venue to an iMac running Resolume Avenue. The iPad face was connected to a bluetooth keyboard that Torrence used to trigger the video on it. The sum of their efforts was a boggling performance. We wonder if Daft Punk might use the same idea for their new helmets.