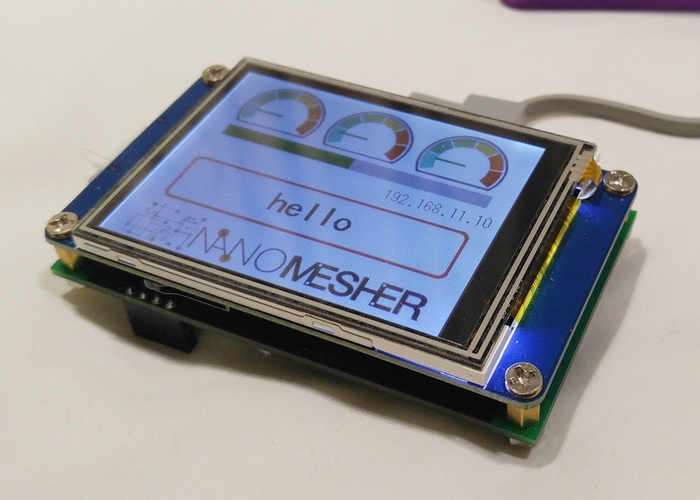 Developers, makers and hobbyists that enjoy making Internet of Things projects may be interested in a new wireless human machine interface which has been created by Nanomesher.

Watch the video below to learn more about the interface which has been created by combining a Wemos D1 mini with a Nextion touch screen display and leaving the IO exposed to provide endless possibilities for IOT developers.

Features of the Internet Of Things interface include :

• Can be used as a standalone wireless touch screen display. Developers can use the Nextion design tools to build user interfaces and deploy onto the Nextion screen.  An API is provided out of the box to set values and get feedback from the HMI.  You won’t need to write a line of Arduino this way.
• Can also be used as a weather station if you add the optional sensors, API is provided to read the data wirelessly
• If you like to make modifications to the API, you are more than welcome to!  The source of the API will be open sourced during the delivery of rewards.
• Fit nicely to the display. The PCB and the display screw holes fit perfectly.
• Can be used as a development board. All of the IO of the Wemos D1 mini are exposed and functionalities can be expanded, like adding thermometers and pressure sensors.
• As a wireless HMI – Use Nextion Editor to design the UI and deploy onto the display.  Connect the wireless display to your wifi network and use the pre-loaded http / mqtt api to control and receive input to/from display. You don’t need to write any Arduino code
• As a weather station – Plug in the optional weather station pack sensors onto the board, connect to your wifi network and get sensors data via HTTP api.  You don’t need to write any Arduino code
• As a development board for your IOT project – Customise with your Arduino code and be creative.  You have access to Digital and Analog IOs / i2C and serial port.

For more information on the new wireless human machine interface jump over to the Kickstarter website for details by following the link below.