I’d wager that most people who enjoy video games have played Angry Birds one platform or another. The game originally launched for mobile phones before hitting tablets and eventually heading to the computer. Intel has announced a themed version of Angry Birds is now available on Facebook. 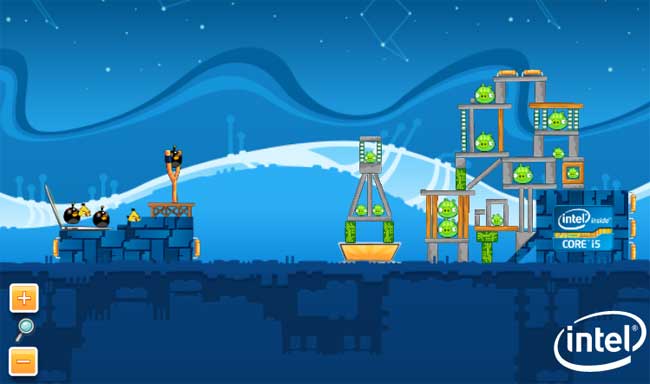 The themed version of the game has Intel ultrabook inspired levels and design elements. The slingshot that flings the birds is yellow and blue, which are Intel colors. The environments that you play have circuit boards to replace some of the wooden blocks that the birds are trying to destroy.

The green pigs also have a circuit board design on their heads. The game is free to play, and has scoreboards that can be shared on Facebook to challenge friends. “Our top priority is to surprise and delight our fans,” said Peter Vesterbacka, Mighty Eagle and CMO, Rovio. “The game is a great way to experience all the fun of Angry Birds in a brand new environment, inspired by Intel’s spectacular new technology.”