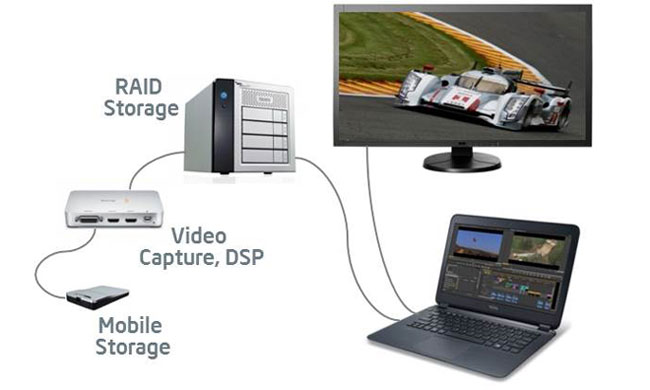 Thunderbolt 2 was previously known as Falcon Ridge and Intel says that the protocol has enough speed for the simultaneous transfer and display of 4K Ultra HD resolution video. The significantly increased speed comes thanks to a new controller chip combining the original Thunderbolt protocols 10 Gpbs uni-directional channels into a single 20 Gbps bi-directional channel.

Thunderbolt 2 will also support DisplayPort 1.2 enabling video streaming to a single 4K monitor or dual QHD resolution displays. Perhaps the best news is that since the only thing that has changed with Thunderbolt 2 was the controller chip, existing cables and accessory hardware will work with the new protocol making it completely backwards compatible. So far, only Apple has adopted the original Thunderbolt technology. Perhaps with twice the performance and Ultra HD hardware and content on the horizon, more manufacturers will adopt Thunderbolt 2. There is no exact launch date for Thunderbolt 2 at this time with Intel only promising by the end of 2013 with a ramp-up in 2014.