If you are a big fan of the Instapaper application for iOS devices as I am, you will be pleased to know that its developers Marco Arment have now released v4.0 of Instapaper for iOS. Bringing some great new features to the iPhone and iPad applications and make them even greater.

The new iPad Instapaper update brings with it a major overhaul of the iPads user interface which now presents items in a grid like arrangement with a control bar positioned to the side. The iPhone interface has also received the few tweaks and includes a dark mood feature and options to hide the status bar together with new fonts and sharing panels. Social network integration has also been revamped within the Friends section which now allows you to browse recent links posted on Twitter, Facebook and Tumblr feeds. 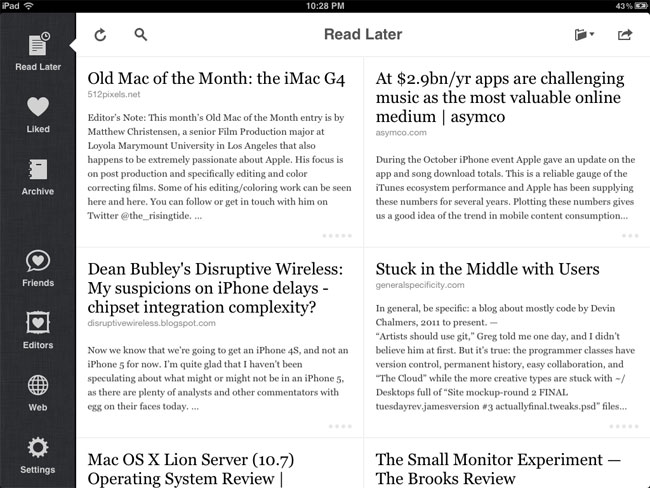 The new Instapaper applications also now include a new search subscription feature that allows users to search the contents of every article they’ve ever saved for small monthly fee of $1.

Other new features included in new update include the ability to now moved, archive or delete articles in bulk and its now also possible to customise the number of liked or archived articles saved on your device locally.

Instapaper 4.0 is now available to download from the Apple iTunes App Store for $5, and is compatible with any device running iOS 4.2 or later.