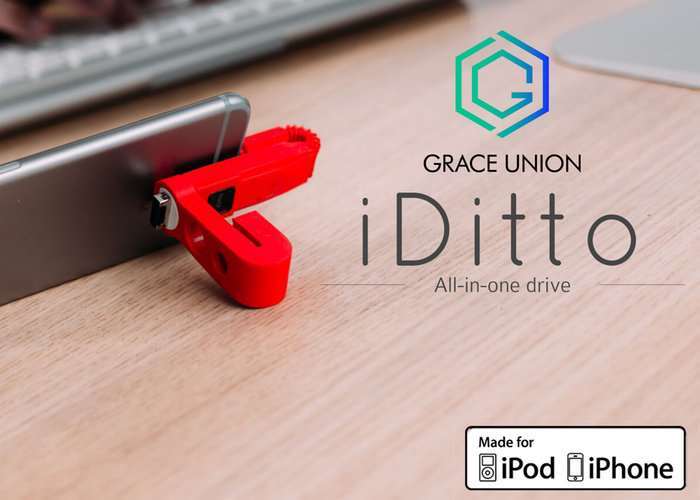 iPhone users that are currently struggling for storage space on their mobile device, but would rather spend extra cash to upgrade at the current time, may be interested in a new expandable iPhone storage solution called iDitto.

Watch the video below to learn more about the iDitto iPhone storage solution, designed by Grace Union and launched via Kickstarter this month to raise the required funds to go into production.

iDitto is an MFi certified all-in-one USB Flash drive for iPhone featuring a user-friendly design to fulfill your daily needs iDitto features our innovative (patented) cover, creating a sleek form when the iDitto is closed, as well as protecting the USB from filling with dust and pocket lint.

When the cover is attached to the iDitto while plugged into the iPhone, the iDitto instantly transforms into an iPhone stand (patented), allowing you to FaceTime your friends or watch your favorite movies — Anytime, Anywhere. The inherent flaw of the iPhone is its small storage capacity and inability to expand storage. Most users simply do not have enough space to store all their photos, videos, and files.  With the increasing popularity of recording in 4K, as well as taking many photos while on the go, “running out of space” is becoming a significant issue.

iDitto is now available to back via Kickstarter with early bird pledges starting from just $25 and delivery expected to take place during November 2017. For full specifications and more information jump over to the official Kickstarter campaign page via the link below.