Reports are coming through that Hulu has now added the new BlackBerry PlayBook to its blacklist of devices. The Hulu service was originally available on the BlackBerry PlayBook allowing users to view TV shows and movies, but now brings up the message pictured below.

It now looks like Hulu has changed its mind regards offering content via the Playbook and has now closed down Hulu access.  This isn’t the first time a device has felt the wrath of Hulu and Sony’s PS3 browser once had access to Hulu as did Google TV. Which Hulu also blocked together with Flash-equipped Android phones and tablets, including the Motorola Xoom. 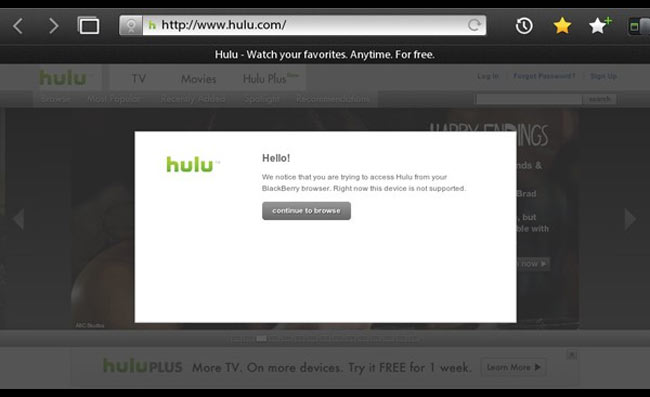 Hulu might start to see sense soon and provide an app for the BlackBerry PlayBook, as their service is great for users and tablet owners who enjoy the service would surely subscribe to an Hulu Plus, $8 per month package. Take a look and our article on Android vs iPhone to see which smartphone and mobile platform is best for you.