IFA 2014 will kick off in less than a month in Berlin, Germany, starting from September 5th until September 10. We’re hoping to see some exciting new devices and technology at the event.

Recently, Huawei sent out press invites to the media for its event on the eve of IFA 2014, kicking off at 3pm local time. The company is expected to show off its new devices, and from what we can get from the invite, there’s a chance we may get to see the Huawei Ascend Mate 3.

Join Huawei Consumer BG in Berling on September 4 for an exciting announcement that will “Make It Possible” for more people around the world to experience the benefits and joy of enhanced speed, design and personalization in technology. 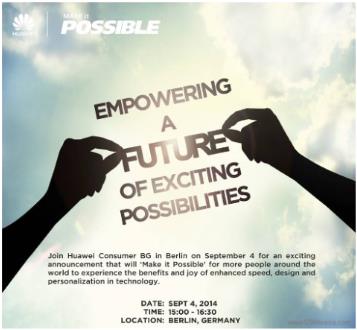 Rumors suggest Ascend Mate 3 may come with a 6-inch display sporting a resolution of 1920 x 1080 pixels, and is rumored to come with a the HiSilicon Kirin 920 with Mali-T624 GPU. Other rumored features include 2/3GB of RAM, a 13MP rear camera for photos and videos with a 5MP front-facing camera, and Android 4.4 KitKat as its operating system out of the box.

There’s no official word from Huawei about the phablet, but we’ll out if it’s real in less than a month. We’ll update you as soon as more information comes up.