In the past few months, HTC has been transparent when it comes to updating its handsets to the latest Android operating system. They were pretty quick compared to other OEMs in releasing timely updates for its handsets as well.

With the launch of the HTC One M8, HTC introduced a new Sense 6.0 UI. The company announced at the launch event that Sense 6.0 will also make its way to existing devices, including the HTC One M7, HTC One Mini and HTC One Max. Now, the company set up a status page for the progress of the Sense 6.0 update for its customers. 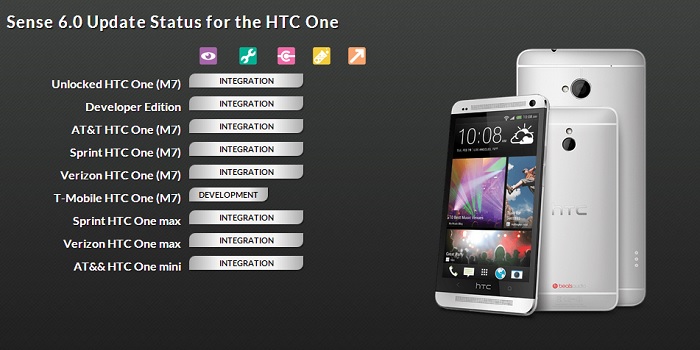 The page has been set up for HTC devices in the US and Canada, which is quite impressive. Currently, the list shows almost all the devices in the integration stage, while T-Mobile HTC One M7 is in development.

This is a pretty good step, especially for customers who want to know about the progress of the update. Usually, Android updates takes a little longer to roll out since OEMs had to send it to the carriers, who then customize the software by adding their own apps and services, before it roll out to customers, which is the time consuming task. This way, HTC lets its customers know when it has sent the OS to the carriers.

We’ll update you as soon as Sense 6.0 rolls out for existing HTC devices.