The HTC Radar was announced recently, and it is HTC’s latest Windows Phone 7 smartphone and will come with Windows Phone 7.5 Mango, and now it looks like it is headed to T-Mobile.

The guys over at TMO news have got their hands on some photos of the new HTC Radar for T-Mobile, which you can see below, the HTC Radar features a 3.8 inch touchscreen display with a resolution of 480 x 800 pixels, processing is provided by a single core 1GHz processor and it comes with 512MB of RAM and 8GB of storage. 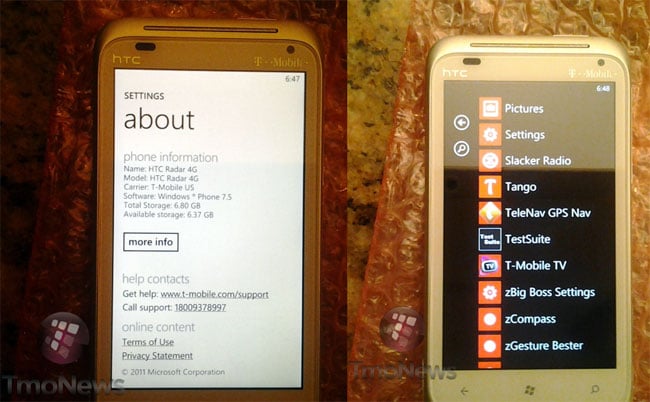 Other specifications on the HTC Radar include a 5 megapixel camera with an F2.2 lens, LED flash and a BSI sensor, on the front there is a VGA camera for video chat, and it comes with 3G, GPRS, EDGE and 802.11 b/g/n WiFi, Bluetooth 2.1 and a 1520 mAh battery.

Head on over to TMO News for lots more photos of the HTC Radar for T-Mobile.