We have heard rumors about HTC upcoming phablet known as HTC One Max. HTC One Max posed for the camera several times in the past few weeks, showing us a fingerprint scanner at the back along with other specifications the device is expected to bring at the table. While we don’t know how the fingerprint scanner will be used, it looks like HTC will be following Apple’s footsteps who revealed a new Touch ID sensor in their latest iPhone 5S.

Now, HTC One Max poses for the camera yet again. The leaked image doesn’t show us anything new, but they do give us a rough idea of the size of the phablet, along with the presence of a fingerprint scanner on the back. The image below shows the purported HTC One Max next to HTC One. 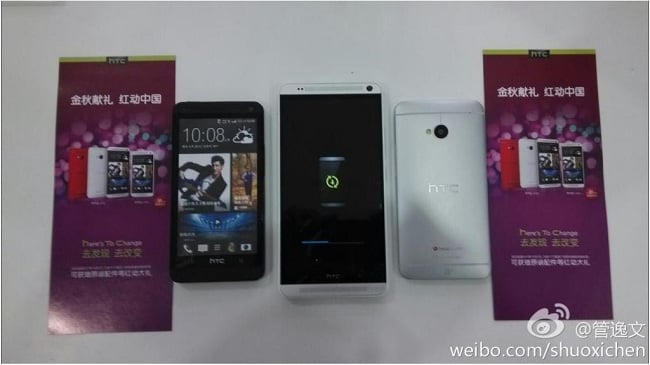 The images appeared on Weibo (Chinese Twitter alternative), which was later spotted by the folks at Mobileaks. Based on the leaked images, we can say that the screen size should be close to 5.9-inch as its younger brother features a 4.7-inch display, so estimating the size of the device shouldn’t be a difficult task. 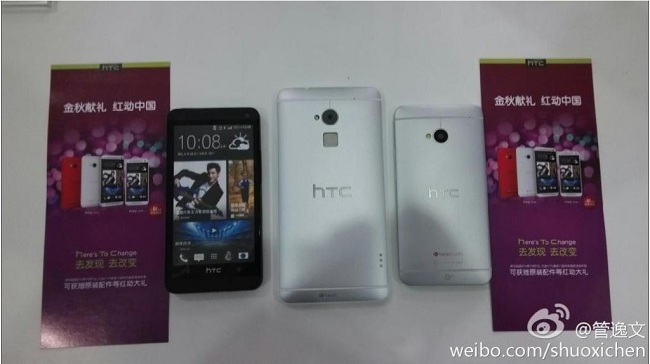 The HTC One Max is rumored to feature a 5.9-inch Full HD display, quad-core Snapdragon 800 SoC with a clock speed of 2.3GHz, 2GB RAM and 16GB build-in storage with a microSD card slot. We also expect to see other HTC goodies such as Blinkfeed, UltraPixel camera and Boomsound speakers. On the software side, HTC One Max is expected to run Android 4.3 Jelly Bean with Sense 5.5 UI out of the box.

Currently, there is no official word from the Taiwanese manufacturer, but based on the number of leaks, our wild guess is that HTC will make an official announcement very soon.