There is no way that you can look at the ChaCha’s design and remain completely indifferent. There’s just a scrappiness and audaciousness about it, not to mention all the design throwbacks to a simpler time when phones were still smart, but not, as today, ridiculously so. Plus, it’s got a chin that’s half the size of the device itself. If that doesn’t at least get the attention of the G1 nostalgia hounds, it’s hard to guess what will.

Despite the eccentric design touches, however, the main focus on this device is a tiny button you could almost mistake for an errant logo. At first glance it seems placed utterly without rhyme or reason, just smack under the keyboard on the right hand side. Prolonged exposure will, however, teach the fresh-faced HTC ChaCha owner the advantages of its placement. 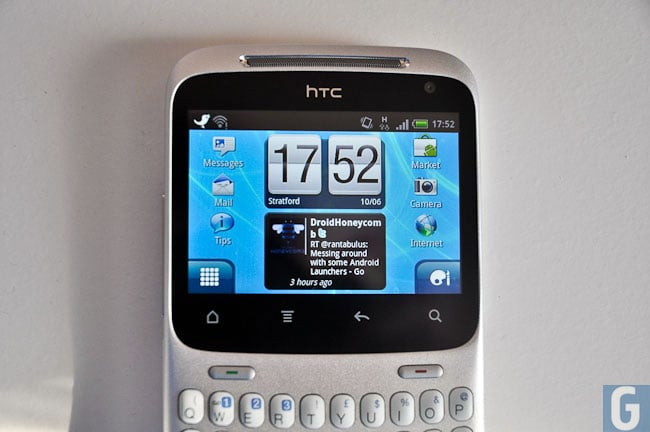 The ChaCha makes no bones about being underpowered, indeed, it’s one of its main selling points. Not the fact of being underpowered itself, but the rather pocket friendly 114.4 x 64.6 x 10.7 mm dimensions slightly less beefier processing power affords it. 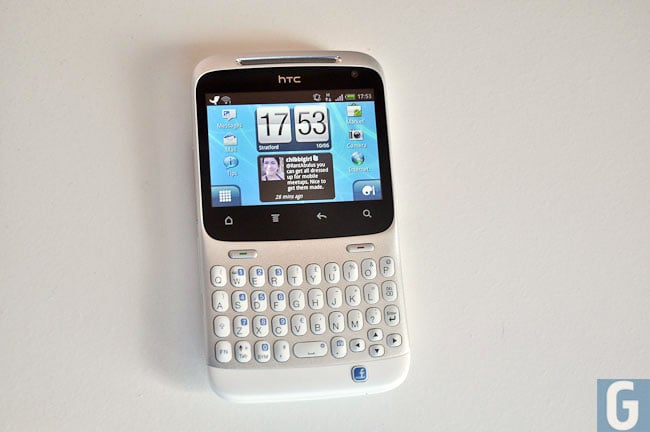 The only slight issue could be the 512 MB of RAM. Other phone limitations will probably constrain the phone from needing much more, but 768 MB wouldn’t have broken the bank.

Standard A-GPS and HSDPA put in an appearance, coupled with Bluetooth 3.0 and that’s about all the fancy on-board tech this sort of teenage-centric phone requires.

The design is one of those love/hate things, you’re definitely going to be taking or leaving it, but most decidedly not both. And while you’d think the classic mobile phone mainstays of white, grey and silver shouldn’t draw too much attention since every other phone is one of or a combination of those colours, it still manages to draw faintly bemused stares on the Tube, although we admit that could easily have been the chin. 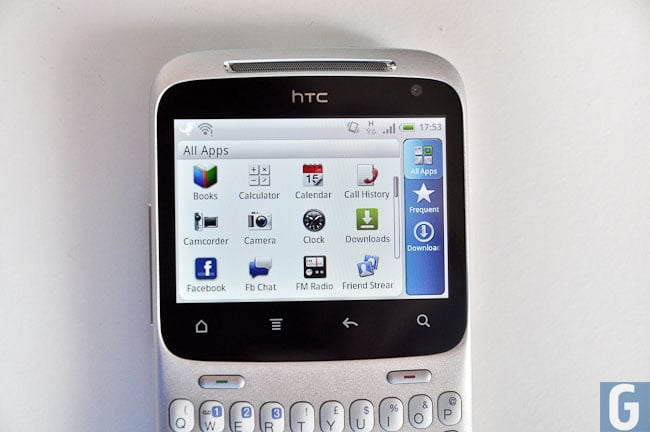 The display isn’t that tiny in itself at 2.6 inches, but compared to modern smartphones it is noticeably Lilliputian, to the extent where it was a bit of a shock to see a functioning touchscreen that size. A resolution of 480 x 320 pixels means a portion of the Android Market will be closed to you, but the processor would likely have objected to apps involving heavy lifting in any case.

If you’re worried about how HTC managed to fit the usually expansive and graphically intensive Sense on such a tiny, pokey device, don’t be. Interface tweaks abound and most graphical flourishes have been removed, making the ChaCha seem a lot speedier than it actually is, but still maintaining the Sense functionality, albeit in a smaller package. 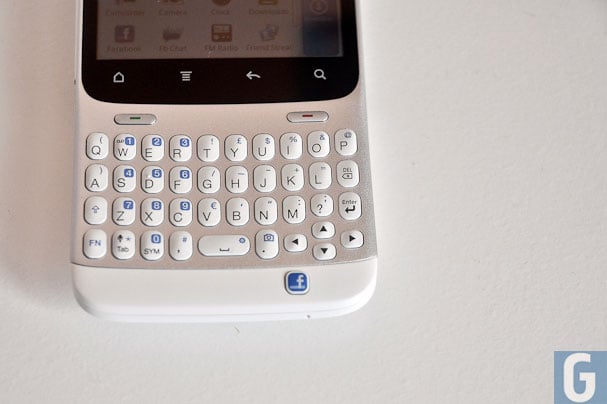 The keyboard is nothing short of excellent, with delightfully clicky keys and an airy layout that you can confidently tap away at your heart’s content. Our review unit had two wonky keys though, so you’d better give your handset a good once-over when it arrives, but who uses “n” and “m” in words nowadays anyway?

The processor raised a few eyebrows when news of the little fellow started doing the rounds, specifically the then-announced 600 MHz clock speed. HTC quickly caught on that in the 1.2 Ghz dual core smartphone era this would not do, so it promptly squeezed 200 of those self-same MHz more, up to a now almost respectable 800 MHz. 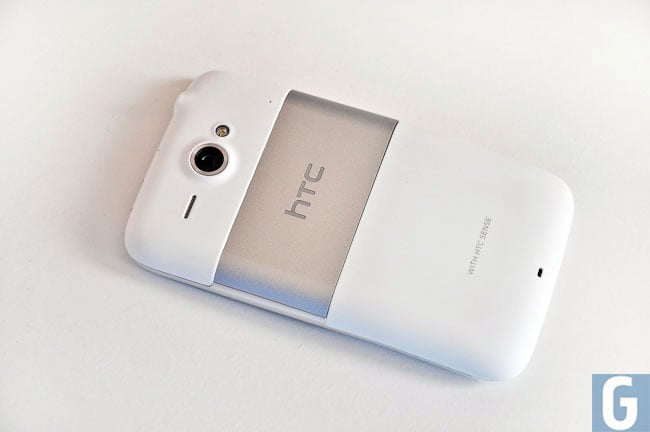 With no Flash or access to resource-draining apps, the processor is likely more than enough for this phone’s target demographic and might have been even stuck at 600 MHz.

The camera is exactly what you’d expect, putting in solid performance for a 5MP shooter but not suitable for anything more ambitious than, fittingly, a Facebook photo. Video isn’t quite 720p, but again, the 640×480 capture will make short work of any barbecue with aplomb. Lest we forget, there’s also a VGA camera in the front, for what it’s worth. 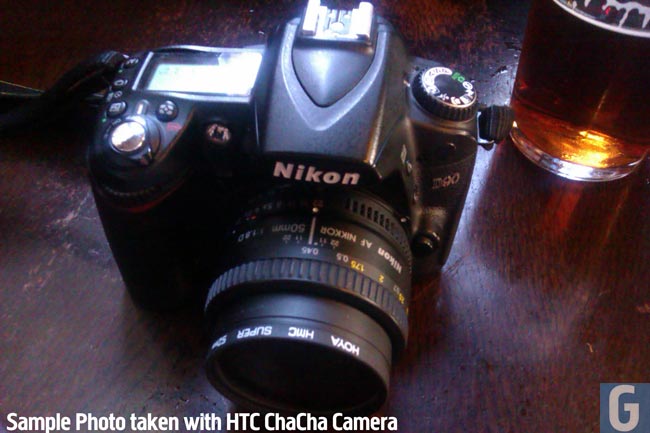 The reason why HTC could afford to bump the processor speed, as well as the reason for what in a chinless device would have been a fairly slim profile quickly becomes apparent when examining battery life. Despite its diminutive dimensions, there can easily be two days of moderate to heavy use nestled in there and the handset is definitely near the upper limit in terms of battery life when it comes to Android devices period. 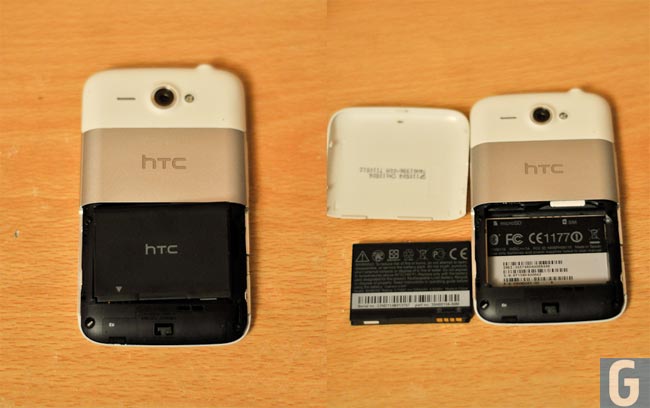 As a Facebook phone it has no choice but to succeed, since there’s nothing quite like it out there in terms of convenience. This phone won’t even need to be sold to people for whom mobiles are synonymous with Facebook, they’ll probably just buy it on principle.

But there are a few more segments this phone will serve, that aren’t immediately apparent. Recovering Blackberry users looking for something with a relevant OS would be the most obvious choice, if they can tear themselves away from BBM. 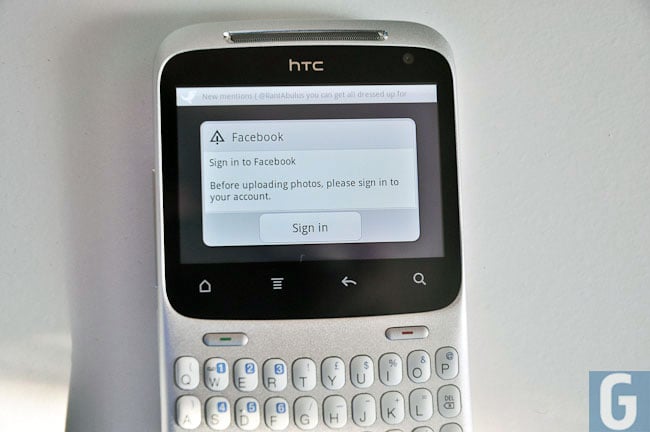 But by far one of the most interesting niches the ChaCha could slot in, and we’ve already seen this happening via bundle deals, is the Android tablet owner who is looking for a smartphone companion on the cheap. As the reasoning goes, why spend money on both a powerhouse mobile and a great tablet if you’re going to be doing most of your media consumption just one of them? Which is why more people simply buy a solid tablet for media and a “just a good enough” Android phone for day-to-day, a role which the ChaCha seems to relish perhaps even more. Take a look and our article on Android vs iPhone to see which smartphone and mobile platform is best for you.